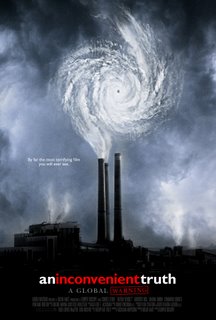 There were Al and Tipper, as in Gore, beaming from the audience at the Academy Awards, basking in the glow reflected from the little golden guy presented after An Inconvenient Truth won for Best Documentary film. There was Melissa, as in Etheridge, thrilled because her song, I Need to Wake Up, was a surprise winner for Best Song. Global Climate Change was a star at the Oscar's and the audience was told that these Awards had "gone green." I am delighted that hundreds of millions of people were reminded that this is an issue which must be addressed, and immediately.

Of course the Oscars are known for their glitz and glamour, not their depth or substance. Good actors take on roles that are not at all like their own personalities. If they do it really well they are given awards. It's interesting that the word "hypocrite" has its Greek root in the word for actor. Somehow we all have to act authentically, not as hypocrites who say one thing and do another.

In his words of acceptance Mr. Gore (the Goracle as he has been dubbed) said that our "will is a renewable resource." It's a great phrase and one that Green Christians can take to heart. We need to be people of the truth, even when it is inconvenient. We all need to wake up.

I for one, am always glad to know there are religious people who understand the importance of environmental issues. It's good to hear and encouraging, and yes, I was delighted by the Oscars.

Gore's movie won, but he has his own act to 'clean up' I hear. A huge mansion spending loads to heat it and light it up. He's got some 'greening' to do.

But we often speak before looking in our own backyard. He's hearing about it and I trust will do just that. I believe he believes in what the movie/book was about...he just forgot to peek into his own way of living first.

A good lesson for all of us!