A Bridge of Living Water 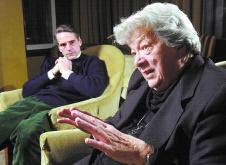 The Oscar and Golden Globe winning actor, Jeremy Irons has been in Toronto this week. He has what may seem like an unlikely friendship with a Roman Catholic nun, Elaine MacInnes. She is also a Zen master and has written a book called Zen Contemplation: A Bridge of Living Water which I bought after hearing her interviewed on CBC radio several years ago.
One of her projects is introducing meditation to prison inmates and Irons has worked with her in institutions. His Canadian trip will include a fundraiser for this interesting work.
A while ago I quoted from Matthew 25 where Jesus tells a parable to impress on his disciples the importance of giving food to the hungry and care for the sick and visiting the prisoner. The project which Sister Elaine and Jeremy Irons are involved in answers that call.
Posted by David Mundy at 9:11 AM