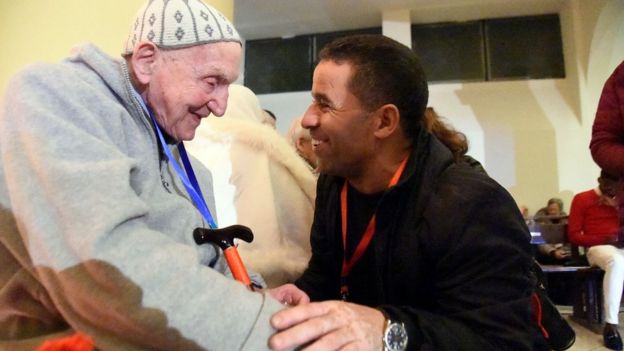 Last weekend I read that the Roman Catholic church beatified nineteen Christians who were killed during Algeria's civil war which was waged between 1991 and 2002 . Beatification is the first step toward sainthood in the Catholic church and this the first such ceremony to be conducted in a Muslim nation. Seven of the murdered were Trappist monks from a monastery and one of the two survivors was present for the ceremony. A remarkable film was made to tell the story of these brothers and I wrote about it in March of 2011:


On Friday we went into Toronto to see a film which won't get wide distribution, even though it has received positive reviews just about everywhere it has been shown.

Of Gods and Men is a French film (subtitles), a dramatization of actual events. It is about a small group of Trappist monks who lived in a monastery in the Atlas mountains of Algeria. They peacefully co-existed with the local people, selling their produce in the local market, joining in the celebrations of village families. One brother was a doctor and the sole source of medical care for the villagers. The brothers learned about Islam and were respectful of that religion.

Then came terrorists, Islamicists, who threatened them and demanded medical help. The terrorists were at war with government soldiers who didn't like the doctor treating the enemy.

The film lets us see the gentle but determined life of the monks, the rhythm of their daily worship, and their heartfelt struggle to discern whether they should stay or go. They come across as real people who nonetheless believe that Christ has called them to a life of service in that place, and so they stay.

We see the tensions rise and when the brothers enjoy a meal with cheese brought by a visitor and good wine there is a sense that it will be a last supper. The terrorists come in the night and kidnap seven of the nine monks, the other two hiding. The ending of the film is not graphic, but we are told that the seven were beheaded and no one was brought to justice.

As we drove home we talked about what we might be willing to do for our Christian faith as two people living in a land where it doesn't cost much to be a follower of Jesus. At the same time we wondered whether the comfort level we experience here has led to the decline of Christianity. We tend not to value the things in life that don't cost anything.

What about you? Do you think you could choose harm's way for Christ? Do you find you "fly under the radar" when it comes to your faith?
Posted by David Mundy at 1:00 AM