I Was a Stranger and You Welcomed Me 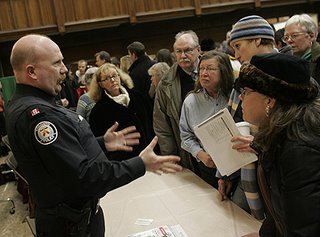 Last night a dozen homeless people bunked down in an Anglican church situated in one of Toronto's toniest neighbourhoods called "the Beach." We might not have heard about it, except for the concerns of those who lived in the area. This program is new for St. Aidan's, and those who live around the church want to know about the safety of bringing the homeless into a residential area. There is a nursery school in the church facility, and both the administators and parents have concerns as well.

As tempting as it might be to criticize these neighbours , they had every right to know what was going to happen alongside them. When we lived in Northern Ontario our downtown congregation began an Out of the Cold dinner. Our modern church building also housed more than a hundred seniors. How would we make sure they were safe? What effect would the dinner guests have on the businesses which were in the building? The honest questions and the resistance pushed us to be well organized as well as idealistic, long before the first people came through the door.

Nearly a decade later the program is still running. Some still figure it shouldn't be there. Thousands have been nourished through those dinners. And volunteers, from young children to seniors, developed a whole new perspective on the words of Jesus "for I was hungry and you gave me food, I was thirsty and you gave me something to drink, I was a stranger and you welcomed me."Matthew 25:35

The information sessions for the folk living around St. Aidan's have allayed many of the fears and last night the program began. In the end it will be a refuge of Christ's compassion for the twelve who sleep and eat there (a good biblical number don't you think?) It may be of even greater benefit for the spiritual health of this neighbourhood.