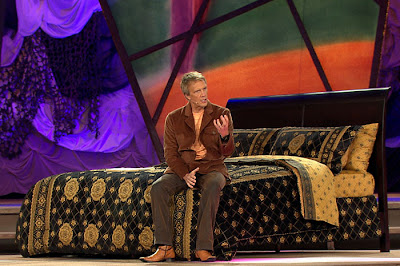 A pastor by the name of Ed Young has told the members of his Grapevine megachurch in Dallas, Texas to have sex every day for a week. Of course they are supposed to be married and the couple must be a man and a woman. As you can see, he actually brought in a honkin' big bed to help illustrate his point. Apparently he wants his folk to be sexually active but not too inventive. He has set down this challenge because he believes that God has given us the gift of sex as the "superglue" to keep marriages intact. It's a metaphor I'm trying to get out of my head.
Actually, he should be commended for addressing the subjects of sexuality and sexual intercourse in church. When have you ever heard a sermon on the subject of sex? I don't think I have ever preached one -- and I'm fairly sure I would remember!
It's odd. Ministers marry couples who often have babies who are then baptized in church. We're assuming that something is going on in between the wedding and the baptism. But we just don't talk about it. I remember reading a professional journal article which issued a challenge to youth leaders to discuss sex in a responsible and positive way with the teens who attended their groups. I wonder how many leaders took up the challenge.
Even though Martin Luther left the Roman Catholic church and married, celebrating the gift of sex and procreation ,we tend to take a "don't ask, don't tell" approach to sexuality in our Protestant churches. Some churches are very negative about sexuality. One of our daughters attended a church for a while during university. She went to a bible study for students where the leader, a woman in her thirties, advised that they should avoid sexual temptation by avoiding even holding hands before marriage. Our daughter stopped attending.
What do you think? Was Pastor Ed a brave guy or should he have kept his opinion and his bed to himself? Does the church have a role in creating a healthy outlook on sex and sexuality.
Bye the way, Ed challenged his flock to have sex from last Sunday to next Saturday, so if you want to participate you may have some catching up to do.
Posted by David Mundy at 12:54 PM

The less the "Church" has to do with sex the better. All the wrongs done throughout history in the name of God or of the church dealing with sex is shameful.
As for Pastor Ed it would be nice if he kept his right wing ideas to himself.
The church should promote everyone to have a healthy attitude to sex and be able to talk about sex and sexuality it an open and caring way. It would make a great sermon.

Personally I would like the church to stay out of my bedroom. There is only room for two! I agree that that we should be able to talk about it without feeling uncomfortable, however I draw the line at my 'pastor' giving me guidelines. I can just imagine the men in the congregation being very much in agreement and the women just thinking "Oh Lord"...
Pastor Ed sure knew a way to get into the news!

I was reminded today that the youth conference in which Rev. Cathy participated on Friday and Saturday focussed on teen sexuality. So it is an issue being addressed by our denomination.

We probably all agree that while we should be more open and honest about sexuality, I shouldn't haul my queen-size bed down Church St. any time soon.

Is this not something that readers who are parents of younger children are thinking about?

I was wondering what was going on at the manse when we saw the matress on the street on garbage night??? :)
I think more and more young people are more open about sexuality and I believe that the more tools and education we give them the better able they are to make good decisions.

I don't believe sex should be a taboo subject in the church. We need to talk about it. I also agree that doesn't agree that churches should create guidelines, but they should be able to talk about it. This includes talking about healthy relationships, pregnancy outside of marriage, rape and sexual abuse, etc. Most of these subjects have been taboo within the church; if we want to be a supportive and nurturing presence in the lives of the church family, these subjects need to be discussed.

Youth also need a safe place to talk about these subjects. As a youth leader once, I was always very comfortable when the subject came up, and I took the opportunity to take the talk even further, which I think surprised the youth sometimes and made them feel bringing it up again.

Thanks for these additional responses. I guess I just lost my nerve Nancy!