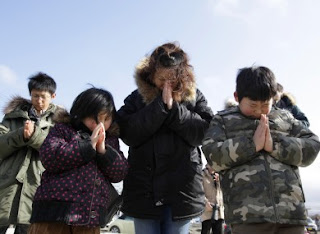 I have been thinking about the anniversary of the earthquake, tsunami, and nuclear meltdown which took place in Japan a year ago. The natural disaster aspects of that day are difficult for us to comprehend and a year later some communities are rebuilding while others have virtually disappeared.

This anniversary comes shortly after a band of tornadoes devastated communities in the southern United States. While far fewer people died there, those who were in the path of the storms have been traumatized.

In each situation people have gathered to pray as a way to seek solace for events truly beyond our understanding. These disasters didn't occur in developing nations. Both Japan and the U.S. have early warning systems and are among the more advanced and wealthy countries of the world. Yet in each instance the force of the elements proved overwhelming. Our sense of security is important in order to carry on from day to day, but we are shaken when these events unfold because we realize our fragility.

One heart-wrenching story is of the Japanese mother whose child was swept away while at school. She left her job, has trained to become a heavy equipment operator, and now spends each day with a large backhoe, excavating the area around the school in search of her child's remains.

God be with all these folk in their recovery.

What are your thoughts about these natural disasters? Is there just no sense to it all? There but for the grace of God?
Posted by David Mundy at 6:43 PM

Events like this are one of the major realities that shakes my faith. That women (amongst others and their awful stories) should not have to suffer through the ordeal of looking for her baby everyday like this.

It just makes you wonder ... makes me wonder, anyway, about how something like this could happen, given all that I was taught to believe about ...

I think we are shaken by these disasters and wonder why. I saw a doc in which a child survivor was interviewed. He was remarkably philosophical, observing that sometimes nature brings good things while other times it is destructive.

Of course its true. I can go as a tourist to see a volcano in Costa Rica or Hawaii and be in awe of the energy of ongoing creation. But when volcanoes in Chile or the Phiippines wipe out villages I ask "why God?"