“Which of these three do you think was a neighbor to the man
who fell into the hands of robbers?”
The expert in the law replied, “The one who had mercy on him.”
Jesus told him, “Go and do likewise.”


The conclusion of the parable of the Good Samaritan, Luke10:25-37

What is it with Mr. Rogers these days? He seems to be everywhere, first in what is apparently a moving documentary, Won't You be my Neighbor, and now with a new book called The Good Neighbor. Fred Rogers died fifteen years ago but there has been a resurgence of interest in his themes of acceptance and unconditional love. I've admitted in a previous blog that I never watched even a portion of an episode of Mr. Roger's Neighbourhood because of my impression that Fred Rogers was rather insipid, bland. The truth is that he was a deep and purposeful man whose Christian faith informed his message even though he rarely mentioned religion on his show. 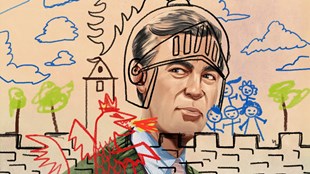 There is an article in a recent issue of Christianity Today which reviews the new biography. It suggests that Roger's was not just meek and mild, that he had an edge which drove his vision for working with children:


Given Rogers’s kindly public persona, it’s easy to forget the simple truth that anger over how the world treated children was a driving force in his life. Rogers was the first to truly envision a world where technology could be used to educate children, to help them develop a healthy sense of themselves as both loved and safe. He wanted to equip them to play a healthy part in a flourishing neighborhood. “Until television became such a tool for selling,” he once mused, “it was such a fabulous medium for education. That’s what I had always hoped it would be.”

I actually like the notion that Fred Roger's was a bit edgy and passionate beneath his calm demeanour.  And it makes a lot of sense that it a climate of incivility and a disturbing lack of basic decency and kindness in the United States he's getting a lot of retrospective attention, as a Christian and a broadcaster. Any way you spell neighbour, compassion and respect is essential.

it really is a very good documentary. I was forewarned to take tissue, which was a wise choice.
My homey was The Friendly Giant, but I can definitely see what a great human Fred Rogers was, and what a honorable cause.