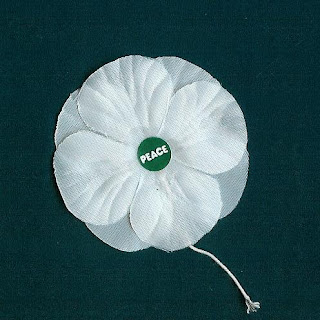 Well, so far so good. I have been wearing a poppy on my jacket and I haven't lost it --yet. It seems that every year I discover that my poppy is MIA and I search out another one to wear. It is always a red poppy because that's what the Legion sells.
You may have noticed a media stir about white poppies this year. In Charlottetown PEI the Farmer's Market banned the sale of them, and there was a strong outcry against them from the local Legion.
These Peace Poppies aren't new actually. In Britain white poppies for peace have been offered as a complement or an alternative to red poppies since 1933, so more than 75 years. Various peace groups offer them there, and some churches do as well, although I read an article written by a British pastor who was sharply criticized within his congregation when he made both red and white poppies available. Some of his folk saw these white poppies as disrespectful to living veterans and those who had died in various wars.
It's curious to me because the goal of most wars is ultimately peace, not just an end to conflict. Whether we think armed combat is a solution for conflicts or not, in civilized societies we hope that peace will be the outcome, not just defeating the enemy. During the Remembrance portion of our worship we honour those who have served, and at the same time affirm that Jesus is the Prince of Peace. I wear a red poppy and we make them available to members of the congregation as they come in to worship. What would happen if we included white ones as well?
What do you think of this White Poppy idea? Is it disrespectful? Would you wear one if it was available?
Posted by David Mundy at 9:11 AM

I would! Growing up in the U.S., poppies are a fairly new idea for me anyway. I didn't grow up with them, so maybe that is why I have no idea why people are so offended by the white poppies.

I would wear both, red for remembering the wars that have been fought and the people who served and gave their lives, and white for our future, that someday our world might know peace.

I agree with you Deborah. I like the idea of visualizing a future with peace, while at the same time showing respect for those whose lives are spent seeking it. It shows a hope that their sacrifices were not and are not in vain. Do we really believe peace is possible anymore? Maybe white popppies can support that hope, along side the sadness. I hadn't ever thought of that before, or known about the white poppies.

David, if you don't mind, I would like to use some of the information you provided on white poppies in my message for the Remembrance Day Service at the Legion on Thursday. We will see how much controversy I can stir up in Stoughton, SK (in the most respectful manner, of course)!

It's a loaded emotional and traditional symbol for some - hence the outcry.

Sure Deb. There is a website you can check out by googling White Poppy Campaign.

I would wear both. I respect both the peace aspect as well as what our veterans did for us. I really don't see how wearing something that symbolizes peace can be an insult to a vet.

My Dad fought in WW2, and you won't find anyone more anti-war than he. He certainly does not take offence to the white poppy.

I would stick to the traditional red. Not because I don't support peace, but because Nov 11th is to remember those who fought and died in the fight for our freedom.
I would not want to stir up controversy on this most solem of days.
Just like I don't wear my "Free Barabus" T shirt on Easter.

After writing about this I saw and spoke with someone who was wearing a white poppy just below her red poppy. First time ever. I was surprised to see it, and she was surprised I knew about it.

In chatting at home, the discussion led to the fact that we would all love peace and think that wearing something as a symbol of peace is good. The question came up, however, Why a poppy? Why not a dove or some other symbol? Perhaps this is what has some people upset. The poppy was chosen for remembrance as the poppies that were found in Flanders Field and they were red. Would I wear a white Poppy? I honestly do not know.