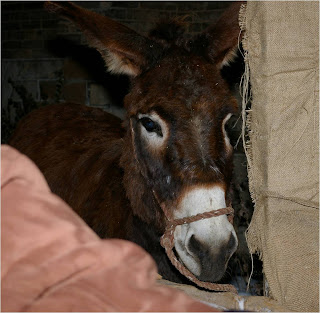 Last evening would have been a good one for the beginning of the Living Nativity which took place at St. Paul's for the better part of thirty years. It wasn't frigidly cold and there wasn't a blizzard -- weather conditions which the organizers faced often enough through the years.

This is the third Christmas without the Living Nativity. The sale of Farmer Coombes property and a week of ridiculous weather a few years back convinced us that all good things must come to an end. There have been two poignant losses this year which brought the Nativity to mind. A few weeks ago at the time of the Christ Candle we announced the passing of Cricket, the donkey who was the longest serving member of the cast. We couldn't seem to agree on how long Cricket participated, but it was in the neighbourhood of 25 years -- or is that bray-bourhood?
Sunday I received an email from the family of Mr. Sodhi, the lovely Sikh gentleman who came every year for twenty or so to wrap the turbans for the Magi. It was a remarkable ecumenical moment in a small town. The "three kings" looked regal and authentic thanks to Mr. Sodhi. He will be remembered with affection.
Any Living Nativity recollections? Many readers have participated in one way or another, including being Mary and Joseph.
Posted by David Mundy at 9:14 AM

The St. Paul's living nativity remains an enduring memory of my childhood, and though I am sad that it came to an end, I still hold it close to my heart.

A precious memory of the St. Paul's Living Nativity is the year my husband and I were Mary and Joseph...over 20 years ago, it was a very special year for us being in the play. Our daughters have been shepherds, my husband and I have both been Innkeepers and he has also been a Wise Man. Many family and friends have attended over the years and all commented on how meaningful it was. Everyone enjoyed the carol singing. We have video of Cricket and also Pinnochio the goat who could get a little impatient at times. Beautiful memories....

Great memories playing Mary and Joseph, but the memory that stands out, is the year one of the sheep decided to run away and everyone was chasing it down Church Street. Friends of ours who were visiting still talk about that evening.

When the Living Nativity started, we did not have a candlelight service, just 7:00 on Christmas Eve. Being part of, or going to see the Living Nativity, was like going to the candlelight service. It just wasn't Christmas until then. Each night was a different "cast", so there were always many spectators. Everyone in our family had a part for more than one year, be it shepherd, wise man, innkeeper or Mary and Joseph. One of my most memorable nativities, was when my husband and I were Mary and Joseph. There was always a lot of time to fill in while the hymns were being sung, so during Away in a Manger, I handed baby Jesus to Joseph to hold. It was a wonderful sight to see Joseph cradling Jesus. No one had done this before and I remember Rev. Schamerhorn calling us later that evening to tell us that how touched he had been by that moment. Mr. Sodhi was
a big part of that evening and everyone had such respect for his "rules" regarding preparation for wearing the turbans. He took his responsibility very seriously and expected the three wise men to do the same. I am very sorry to hear of his passing.

Although we are 'johnny-come -latelys' compared to Criket and company, Mr Sodhi made quite an impression. The "seriousness" with which he carried out his wrapping of our turbans for our Christian celebration/presentation always felt quite profound in our world of warring nations. It is touching that his family contacted "our family". I am saddened by this loss.
And the tribute to Cricket in church a few Sundays back brought tears (admittedly, I am sappy)...the end of a good era.
I do recall that last year of the nativity, on the blustery Sunday evening, we played to an audience of 2....and you were one of them David.:)

These comments are great! Wow, there are as many Mary and Joseph's out there as mall Santas.

Isn't it interesting that the glitches can be as much a part of the memories as the "perfect" productions.

I remember that blizzardy evening very well Laura. There were a few hardy parents and the two of us who weren't connected with the production sitting on the benches. That night Jim got stuck with his truck and had to be hauled out just to get to the church. Then Cricket refused to get back in the trailer. And the rest is history...

I think we would all love to read more recollections.