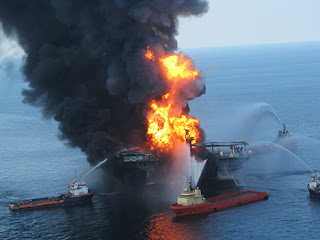 'Tis the season for lists, including top news stories for 2010. Most of those news story lists put the BP oil spill in the Gulf at our near the top, along with the Haiti earthquake, and the Chilean mine rescue. The wars in Iraq and Afghanistan were also up there on a lot of lists and health care in the U.S. Some Canadian lists include the preroguing of parliament, as well as the Winter Olympics.
As many of you will recall, I touched on most of these from a faith perspective, along with others. I tend to muse about what our Christian response might be to situations which are often unfolding at a distance.
Few of these lists include the floods in Pakistan, which brought tremendous misery to millions. I couldn't figure out why there was such indifference to this situation at the time. The failure of the Cancun Climate Change conference and the success of the nuclear weapons pact between the US and Russia seem fairly important as well.
I'm glad that the terrible violation of the environment in the search for oil was so prominent. The Haiti earthquake brought our attention to an impoverished nation which was already languishing off our radar screen.
Which news story would you put at the top of the list of importance? Are there others which you think should be on the lists?
Posted by David Mundy at 7:56 AM

So many stories for 2010, and unfortunately we tend to remember the ones that were the most tragic. Certainly Pakistan and Haiti rank among the saddest, while the one that angered me the most was the Gulf oil spill.

I think one of the positive stories was the winter olympics, and how so many people converged on one city with relatively little trouble. There were peaceful protests by many groups that did not disrupt the city, and it seemed to be a positive atmosphere throughout the olympics.

I guess it's just you and me on this one Johnny! I agree about the Winter Olympics and you were there in a police capacity and could see it all firsthand.

I read that BP is anticipating that the company's cost for clean-up will be "only" forty to sixty billion, rather than estimates of twice those amounts. So it is part of the cost of doing business, even though many creatures died and livelihoods were deeply affected.

Besides the Olympics, one of the most positive and hopeful news story was the story of the rescued Chilean miners - being trapped for so long, Camp Hope and their families. Some of the people I hope we hear more about are Aung San Suu Kyi and her fight for Burma's freedom, the challenge to the extremely wealthly by Buffett and Gates to pledge half their net worth to charity.
The lack of action and response or even concern to the Pakistan floods perplexed and saddened me.
I pray we have seen and heard the last of Terry Jones (the Florida preacher who spewed hatred), Joseph Kony, and Russell Williams.