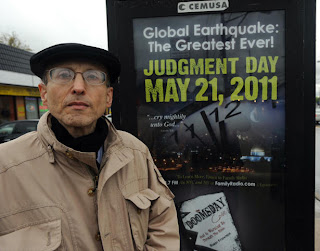 If it warms up this week we plan to spend some time in our kayaks on Saturday. We figure we should get going early, before the end of the world. A group in the United States is insisting that Saturday, May 21st, will be the day for a cataclysmic, global earthquake and we should all be prepared to meet our Maker.

The guy who seems to be behind all this is Robert Fitzpatrick, a retired New York City transit engineer, who is also the author of The Doomsday Code, a self-published book that purports to explain how the Bible reveals what will happen to people who have not been “saved” by God by May 21st. Fitzpatrick has used his life savings, $140,000, to put up billboards and ads warning people.

As wacky as all this sounds, both Judaism and Christianity have an apocalyptic bent to them. Reading the New Testament, it seems that the apostle Paul and other early Christians figured Jesus would return during their lifetimes, although they weren't big on doom and gloom.

Through the centuries there have been plenty of self-appointed Prophets of Doom, predicting the imminent destruction of the world and the return of Christ. The appointed day comes and goes, but that doesn't stop them or their successors from trying again. The fuss over the Left Behind novels seems to have toned down, but they sold millions of copies. For some reason there are a fair number of religious types who seem to get great satisfaction from the prospect of the end of days. Of course they almost always believe that they will be delivered from the destruction. Oddly the modern day prophets tend to be global warming deniers. Instead of committing themselves to healing the planet God has created as our earthly home they wait for Jesus to beam them up.

So, don't say I didn't warn you. As for us, we will have the kayaks ready and thank God for the beauty of the earth. Even if the earthquake comes, what a way to go!
Have you heard that you only have three days left? What is you response?
Posted by David Mundy at 4:12 AM

Just how am I supposed to get my garden planted and weeded in 3 days? I really hate these deadlines...

I'm sorry, but someone had to say it.

At bible study yesterday we chatted about this and one elderly member was relieved -- now she won't bother cutting the grass.

Thanks, and keep your fingers crossed...

Catch you all on the flip side.