Back to the Movies 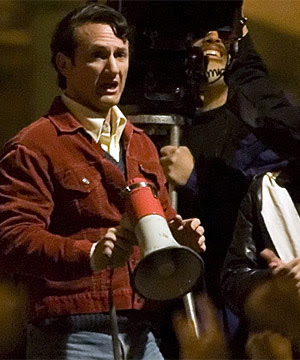 I better catch up on the movies. Last week we also saw Milk, which tells the story of Harvey Milk's activism and election in San Francisco during the 1970's. Milk was a resident of the Castro district, the gay village in San Fran. After several failed attempts he was elected as a city supervisor, the first openly gay man to be voted in to a significant public office in the United States.
Milk also opposed legislation which would have made it illegal to be a teacher and homosexual in California. Religious leaders and personalities such as Anita Bryant led a relentless campaign to ban gays from teaching and other public offices, but in the end they were defeated. President Jimmy Carter, a committed Christian, opposed the legislation.
Watching this story made me think of how often people tell me that they believe in rights for gays and lesbians, but... They usually go on to tell me which rights they don't want extended to homosexuals. It also reminded me of how much societal attitudes have changed and the degree to which I have been pushed to address my own prejudices and stereotypes through my lifetime. This has obviously been one of the most controversial areas the church has addressed in the past forty years, and it still leads to tension and division.
This is a well made and well acted film and Sean Penn is brilliant, once again. Would you be comfortable watchng a film such as Milk? Have your attitudes and perceptions changed over time?
Posted by David Mundy at 6:23 AM

As someone with openly gay members of his immediate family, I can say with great conviction that there can never be such a thing as "selective human rights." Human rights are, by definition, universal. To suggest otherwise is problematic to the core.

Society can and will evolve, and the fact that churchs everywhere are at least open to the debate is encouraging. Contrary to what many feel, progressive and regressive need not be construed as the same word.

Gotta run and catch me some "Milk!"

Saw "Milk" Thought it was a well done show.I did a film course about how human rights are depicted by film directors (I am sure this movie will be added to the course) Been away for a few days so caught up on your past posts. Too late to comment on them but they have added some discussion with my son. Thanks.

I would love to see that movie. We have openly gay members of our family as well, and I have been sadly dismayed over the years that there are still people who have been unkind not only to my family members but to us as well. Change is slow.

Have not seen the movie but plan to. Work with openly gay people and have friends who are openly gay. They are all human. It reminds me that we can be prejudice with religion as well. When I was in university, I was friends with someone until I found out he was Jewish. Having grown up in a small town of either protestants or catholics, I was somewhat naive. It was something within me that I had to work out. Through discussion and EDUCATION I worked it out, and we were friends again, he even offered to take me to a synagogue (sp). This lesson in life taught me that we are all human and should all be treated the same no matter what our sexual orientation or religion.

Your responses point out that many of us have been influenced in our outlook by friendships, family and work relationships. Gays are not "out there" but alongside us in everyday life.