Elijah and the Ravens 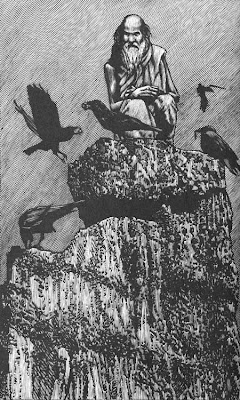 In January our Sunday School will spend time learning about the prophet Elijah, one of the major figures of the Old Testament. According to 1st Kings Elijah was a Godly man who fiercely opposed the corruption of the monarch Ahab. On a couple of occasions Elijah fled for his life into the wilderness where he was ministered to by angels and ravens. Ravens? It sounds like the curious stuff of ancient legends that ravens would bring bread and meat twice a day for the prophet's sustenance.
Still, if there were any birds for God to enlist, ravens would be a good choice. The members of this avian family include ravens, crows, jays -- all highly intelligent and clever creatures. They thrive on every continent on the planet with the exception of Antarctica. When we lived in Newfoundland a Gander photographer would tour the back roads of the province on his motorcycle, his pet crow perched on his shoulder. Researchers figure that ravens and crows are at least as intelligent as dogs and seem to have a sense of humour.
I like the idea that the children of our congregation will learn a little known story of the bond between winged creatures and a human being. Didn't Jesus ask us to consider the flowers of the field and the birds of the air?
Posted by David Mundy at 8:57 AM

In the children's series "Madeline" there was an episode where the ravens "stole" clothes off of clothes-lines to give to the poor, and the 12 little girls in two straight lines solved the mystery of the missing clothes.

The two ravens that figure most prominently in my consciousness are the raven in Edgar Allan Poe's famous poem of the same name (1845), and Roac, the aged messenger raven who aids Bilbo Baggins during the siege of the Lonely Mountain in Tolkien's The Hobbit (1937).

Two animals with decidedly different characterizations (one menacing, the other frail and wise) but in each case, the intelligence of each is marked upon and an integral feature of each story.

"the intelligence of each is marked upon and IS an integral feature of each story."

Thanks for both these responses. I didn't know about the Medeline episode and didn't remember Poe's raven, nor Roac (age perhaps!.) The raven also figures prominently in native creation stories and as the Trickster.