The Poorest of the Poor 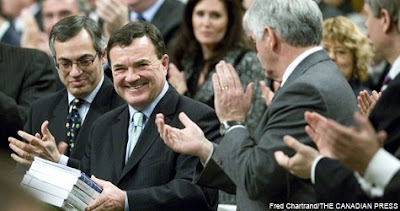 Yesterday's federal budget was old news by the time finance minister Jim Flaherty took the floor in the House of Commons, thanks to a series of designed leaks to let us in on the expenditures piece by piece. To no one's surprise, Canada is following the lead of countries around the world in spending its way out of recession. Our "made in Canada" stimulus package will require billions of borrowed dollars. I have yet to hear of precedents for this sort of "spend now, pay later" initiative that have actually effectively halted a recession, but maybe it will work.
Of course even with the promise of billions in stimulus spending lots of people and groups are unhappy. Premier Danny Williams of Newfoundland doesn't like this budget, but he isn't a fan of anything the feds do. There are some big bucks for renewable energy, but environmentalists hoped for more.
A small voice representing the poorest of the poor was raised yesterday but it probably won't be heard. There are concerns about child poverty in this country, and that the recession will hit the children of low income and unemployed families the most. This group is not well represented and over and over again the interests of children suffer in hard times. There have been huge bail-outs for those who helped create this economic mess, but kids are neither seen nor heard.
The scriptures of both older and newer testaments in the bible call repeatedly for support for the poorest in our society, including children and vulnerable women. In a culture with a strongly Judeo-Christian ethic, it would be good if we paid attention to these exhortations.
Posted by David Mundy at 9:05 AM

I agree. It is the children who do not have a voice in our culture. How do we know if a child is in need? How do we get them and their parents the help they need? Some families are afraid to speak up for fear of losing their children, which never solves anything.

My prayers are with those who are hurt most by this recession, and I pray that they find ways to ask for help and that they are then offered what they need.