Compassion for All Creatures 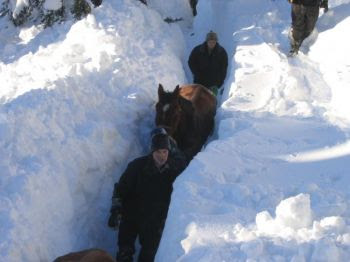 There has been so much heartache and so many bad news stories during the past couple of weeks that it is hard not be dragged down in spirit.
At the same time there are always messages of hope and generosity in the midst of sadness. The one I really appreciated came out of a British Columbia region beset by unemployment. A young man on a snowmobile discovered two frostbitten, starving horses trapped in the back-country. The first thought was to put them out of their misery but the man's family decided to try to save the horses.
In no time they recruited a group who worked for days to dig a path through snow two metres deep in order to walk the horses to freedom. Even though they were working in temperatures as low as -40 celcius they dug a trail over two kilometres in length. Some of the workers didn't get a Christmas tree up because they were so preoccupied with freeing the horses. After a week of diligent effort they were able to get them out to begin their recovery.
Our nativity scenes usually include animals gathered around the infant Jesus, even though they aren't mentioned in the gospels. There is something about the bond between humans and other creatures that encourages us to place them alongside the Christ-child.
I'm glad to hear that good people honoured this in such a generous and practical way.
Posted by David Mundy at 7:48 AM

What a great story to start off 2009. Keep them coming!