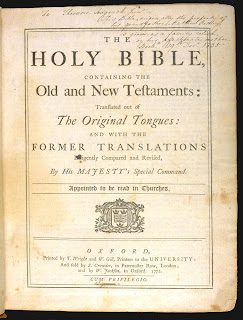 This year marks the 400th anniversary of the King James Version of the bible. The KJV was a remarkable achievement, assembled by committees of biblical scholars throughout Britain. It was also a fascinating political decision on the part of King James the First. His predecessors had suppressed publication of English versions of the bible, fearing that reading "dangerous" passages about the reign of God bringing an end to the rule of earthly kings might lead to revolution. During the reign of Henry the Eighth translators were marked men, hunted down and killed throughout Europe. William Tyndale was the most notable amongst them, although much of his translation of the bible eventually made its way into the KJV.
King James decided it was a good strategy to maintain control over the translation process and made sure that a copy of the Authorized Version (KJV) was placed in every parish church. The argument is made that translating the bible into the vernacular in different countries paved the way for democracy, so some of the concerns of monarchs were realized.
There are an incredible number of translations and paraphrases available today, although the irony is that it a time when bibles are inexpensive and accessible they just aren't read, at least in our culture.
Do you care about this anniversary of the King James Version? Are you curious to know more? http://www.kingjamesbibletrust.org/ Have you found that the easier-to-read versions mean that you delve into the bible more?
Posted by David Mundy at 4:20 AM

I wasn't aware of this fact; thanks for bringing it to everyone's attention.

As for reading the Good Book ... I'm still mired in Leviticus!

This flu has made me care about very little. But normally I am fascinated by the Bible's history. You can now get the Douay Catholic bible for 89 cents for your ebook. Almost as cheap as stealing the Gideon from the hotel drawer.

I was aware of the anniversary as the Queen mentioned it in her Christmas address. I had also read it somewhere??? I personally find that I go to a more current version for understanding, especially when teaching Sunday School.

Pupil, it is interesting that you mention the Gideon Bible. The Gideons still come to the public schools and give a copy of the New Testament to grade 5 students, however parents have to give permission in advance that their child can receive one. I saw a copy this year and they have come a long way. The front is a bright yellow with people's faces on the front from around the world. Much more appealing to a young person than the silver/gray copy I got in Grade 5!- which by the way I still have!

I like the KJV for the language. I am amazed that the Gideons still go to the schools.

I still have the New Testement I received in grade 5 as well. Mine was red, and both of my boys received red ones as well. I don't remember if I was asked permission or not.

I have the red Gideon Bible from Grade 5. No permission was neccissary back then.
I also have a number of other bibles I recieved as prizes in sunday school, or DVBS. Honestly never opened unless there was a specific verse I needed to learn so I could win another Bible.
I recently recieved a copy of "The Message" I've just started reading it. I never thought I would laugh out loud from reading the Bible.
Read the story of Adam & Eve in "The Message". God asks Adam if he ate the forbidden fruit? Adam responds with "Eve told me to."

This makes sense to me. It must mean from that day forth a good husband does what his wife asks if he thinks it's a good idea or not, Or if your a woman it is she has to tell him what to do because he just doesn't think;)

This is the fun part of writing a blog. Who knew that this KJV entry would end up being about the Gideons? Just recently I got a letter from the Gideon's asking for an opportunity to come and speak to us. Maybe we should follow up?

There are many expressions from the King James which are deeply embedded in our English language. Many of them were coined by William Tyndale.

I enjoy other versions and paraphrases but the KJV is often the most poetic.

Thanks! A big surprise tied into the 400th anniversary of the 1611 King James Version Bible:

Two scholars have compiled the first worldwide census of extant copies of the original first printing of the 1611 King James Version (sometimes referred to as the "He" Bible). For decades, authorities from the British Museum, et al., have estimated that “around 50 copies” of that first printing still exist. The real number, however, is quite different!

For more information, you're invited to contact Donald L. Brake, Sr., PhD, at dbrake1611@q.com or his associate David Sanford at drsanford@earthlink.net.