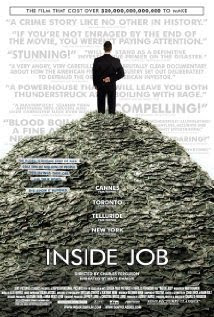 Avarice or greed is a deadly sin, according to the list developed by the Roman Catholic church more than a thousand years ago. Apparently no one passed this information on to the gang on Wall Street before the global financial crash of 2008 which undermined the economies of many nations and ruined the lives of hundreds of thousands around the world. It could be argued that the events follwing "915," had a greater global impact than the horrific terrorist attacks of 911.

I watched the award-winning documentary, The Inside Job, narrated by Matt Damon, on my return flight from Victoria. I was so sickened by the unadulterated greed of already wealthy financial "leaders" that I could barely continue to the end. The collusion of regulators, bankers, rating agencies, politicians, is almost beyond comprehension.
In many cases these persons (mostly men) made tens and hundreds of millions of dollars by betting against the companies they headed, knowing the risks they were taking using other peoples' money. What was worse, after the crash they took no responsibility for their wrongdoing, nor have any of them been punished. While President Obama "talked tough" about bring the perpetrators to justice, it hasn't happened and probably never will. In truth, many of those who profitted from their greedy actions are still working in the financial sector and prospering even further. The U.S. government hasn't enacted new restrictions to reign in this sort of pilfering.
This past week a report tabled by an official inquiry offered that the financial crisis in the U.S. which triggered the global recession was avoidable. What an understatement. The report essentially confirms everything contained in the film. The crash didn't happen because of a series of mistakes or unfortunate circumstances. It was unfettered greed on the part of people who clearly knew what they were doing. Some of this gang make Bernie Madoff look like a nice guy by comparison.
Have any of you seen The Inside Job? Why do you think the U.S. allows a monetary system which can create such disasters? What is the role of the church and religious leaders to speak out against this deadly sin?
Posted by David Mundy at 4:30 AM

There is so much that's right about the American experiment, although it seems to me their definition of "liberty" can be stretched in ways that its Founding Fathers could never have imagined or intended.

Financial deregulation is one of those policies (thanks, Ronnie) that has taken the enshrinement of "liberty" as constitutional bedrock and warped it to serve as the justification for a negative course of action.

In so doing, Wall Street endangered itself, every day people and the nation itself.

We live in a convoluted system where the top .001% of the population control over 95% of the wealth. Therefore they get to make the rules.
The other 99.99% of us need a job to make ends meet. We have to work for them, or buy their products. Many of us have to do both.
The Government has become a giant money eating, self perpetuating monster. Even if there were a honest politition elected to power, they would be thwarted at every turn by the burocrats that have built in obsticles to protect their own skin. There is no accountability. God forbid there would be accountability. They would hire someone to over see the overseers, and they would probably set up a system to protect their own cushy position. I see it over and over again.
I used to think I was jaded or paranoid, but the longer I'm around the more I realize that many people are not worried about the deadly sins. They want to live by "Do unto others before they do unto you".
What they don't yet realize is that they can't take it with them.

I just recently read how, in Jesus' day, Herod Antipas, in order to find favour with Rome, created the capital city of Tiberias, along the shore of the Sea of Galilee. This of course, exploited all the other fishing villages around the sea and the people of the villages. So, around the Sea of Galilee, among the fishing villages, and with the fisherpeople is where Jesus did his ministry.

So, yes, as people who follow Jesus, being in the thick of it is where we need to be.