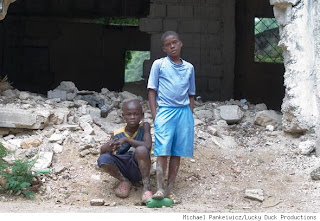 This is the first anniversary of the earthquake which turned the already beleaguered and impoverished nation of Haiti into a nightmare beyond imagining. We were all shocked by a death toll which exceeded 200,000 and the destruction of Port au Prince.
A year later the misery continues. The aid money which was raised in the billions has trickled into the country and to those who need it most. Damaged buildings are being demolished by workers using sledge hammers and pickaxes. Tens of thousands still live in conditions which led to the recent outbreak of cholera. There has been a wave of births including many to women who were raped.
Among the bright lights are the churches of Haiti, and the church-related ministries which are bringing relief through their partnerships. These ministries have been among the most successful in actually delivering aid and continuing to do the important work of education and health care. Here is a prayer written last year in the aftermath of the quake. It still hold true.
Prayer: Extend My Reach -- United Church of Christ
So far, Haiti seems so far from here,
where I live peering into a TV screen
broadcasting misery that splatters across my chest.
I want the images to do more than make me ache.
I need cries for help to touch more than my ears.
I long to matter to people when they most need aid.
So far, Haiti seems so far from my ability to help.
Extend my reach Lord.
May my meager gifts of money, prayerand a shoulder to cry on
help one more person than would be helped
if I just turn awayand do nothing.
What are your thoughts about Haiti a year after this disaster?
Posted by David Mundy at 4:49 AM

It often makes me wonder how such vast sums of money so quickly raised can be diverted and delayed from reaching those who need them most.

The fact that the churches are able to lead so effectively and efficiently is a testament to their vision, service and work ethic.

Thanks Ian. I too wonder about the inaction. I try not to be cynical, but I wonder whether governments are inclined to making the big gestures of aid, knowing that it will be unlikely that they will be required to deliver.

Church-related agencies and other NGO's have often been involved in countries for decades and find ways to continue their excellent work.

What a stirring prayer..