That's What Friends Are For 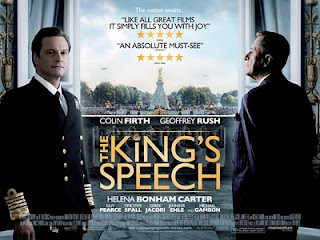 The gospels are the ultimate Buddy Stories, wouldn't you agree? Yes, they tell us about the life, death, and resurrection of Jesus Christ. But Jesus wasn't on the road alone. For an estimated three years he rambled around his corner of the ancient world with a posse of followers. They squabbled and learned, abandoned Jesus and then renewed their commitment to his cause and to him. Despite the teacher student relationship, at his last meal with the disciples Jesus tells them that they are his friends, and that friends lay down their lives for friends.
Two of the best movies I saw in 2010 were stories of friendships, unusual though they were. The King's Speech is about the relationship which developed between King George VI of England and the speech therapist who helped him overcome his crippling stammer. At one point in the film the king admits that he has no friends because of the isolating role of a monarch. At the end of the film there is a scroll which tells us that they did remain friends until the end of the king"s life.
The other picture is The Fighter which is as much about the strange and powerful relationship between two step-brothers as it is about boxing. At times the relationship is so strained that they don't have much to do with one another, but in the end they are reconciled.
Did you see these movies? How important are friendships to you? Have you formed lasting friendships within your faith community?
Posted by David Mundy at 5:49 AM

I have yet to see either, though I've heard nothing but good things about both.

As for friendship, it's just so important, isn't it? To have people external to your immediate situation whom you can lean on for objective advice and support during trying times ... man, they're just invaluable.

They seem more and more so as time passes, too.

I have seen "The King's Speech" and did appreciate seeing the power of the friendship that was present. I found the support of the Queen, later the Queen Mother to be very powerful as well. She stood by him like a rock!

I also know that friendships are very important. I have long lasting friendships from within my faith community that go all the way back to Kindergarten. There are more recent ones that I have at St. Paul's. As Ian says, as one gets older they realize the power of friendships and how important they are.

Great movie on several levels..
friendship is so central to our wellbeing....and to our lives as practicing Christians.
As Nancy notes, his wife (the Queen Mum) was absolutely devoted....through challenging times when their life stories were directed by the "dreadful Mrs Simpson". Great history.
Maybe we commoners have it easy?!!
Janet

I've met my best friends through church. My wife espically. I'd never have noticed her except for what she did for me through the church.
Also my best friends. They live far away, but I just got off the phone with them. I'm very much an introvert, but they bring out the best in me. We laugh and talk about things I could not easily share with anyone else. I love them and miss them very much since they moved.

Janet, the answer is Wallis Simpson, the woman who was indirectly responsible for George the Sixth becoming king.

Is there a prize?