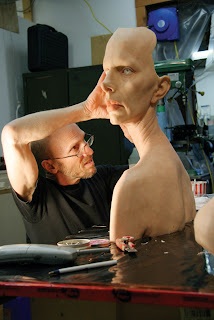 Two Saturdays ago we went to the Art Gallery of Ontario for the excellent exhibit of the work of artists Freda Kahlo and Diego Rivera. They were married to each other -twice!- and had a complicated and often conflicted relationship.

While at the AGO we went to another exhibit by another artist we didn't know, Evan Penny. Penny was formerly a prosthetics wizard in the film industry and now creates large, three-dimensional images of humans which are mind-blowing. They are exceptionally "real" even though they are often stretched and distorted. To stand in front of one of the images is disorienting because of the scale and distortion. The "do no adjust your set" quality invites the viewer to consider what we are actually seeing when we look at others, or whether we actually truly see them. 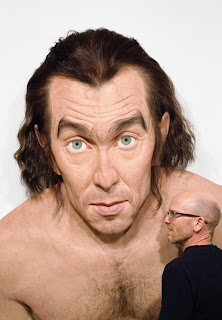 In the gospels Jesus sees and hears persons who are no longer visible or audible in that culture because of physical and mental illness, or gender, or caste. He is radical in his willingess to touch them and share meals with them. The stories are there to stretch our perceptions of compassion and faith beyond conventions.

Have you heard of Evan Penny? Are you intrigued? What about Jesus as "artist" who calls us to new perceptions of those around us? http://groundlingearthyheavenly.blogspot.ca/2012/11/tom-tomson-and-group-of-seven.html 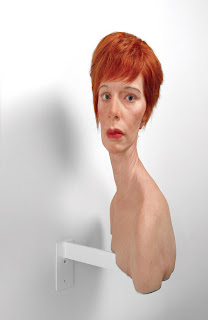 I saw many of these pieces earlier in the year at the AGO. They are so arresting as to literally stop you in your tracks.

Wow. I hadn't heard of Penny before but am intrigued to see more.

My perceptions of people have been forever changed in having two non-verbal children. Understanding that what you see isn't what you always get is a huge lesson. There are times that at first glance, my son Owen appears to be vacant or non-engaged in the world around him. But all it takes is to lean in a little closer, stare deeper into his gaze and you can see that he has a world of thought going on in there. I can see pure joy in his eyes, when his body and face are displaying crazy expressions of frantic or jerky movement that don't seem to match the emotion.

Carly Fleischmann, a Canadian teenaged girl severely affected by autism, has become a perfect example and advocate to support this view. She has learned to communicate eloquently and effectively through typing into a voice-output system (via her iPad). When her body and face may be putting on a display of uncoordinated or spastic chaos with bursts of crazy sounds, she can speak about the most typically teenaged thoughts and blow you away with her 'normalcy'.

I think that it's a gift to learn these lessons.

Haven't seen this exhibit yet. It sounds very interesting, for sure. Probably nothing to get bent out of shape over.