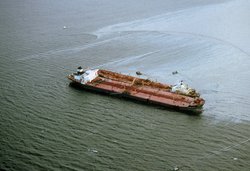 By JOHN HOLUSHA and HEATHER TIMMONS
Published: October 26, 2006
The ExxonMobil Corporation reported today that it earned $10.49 billion in the third quarter, the second largest quarterly profit ever posted by a publicly traded American company. The largest on record was also reported by ExxonMobil — $10.71 billion in the fourth quarter of 2005...


Remember the Exxon Valdez? It was the oil tanker that ran aground near the Alaska shore in 1989, spilling up to 30 million gallons of crude oil over one of the most pristine wildlife areas of North America. An estimated 250,000 seabirds died, along with billions of salmon and herring eggs, bald eagles, sea otters and many other marine creatures. Eventually ExxonMobil came to a 1.1 billion dollar settlement to clean up the mess, but the Exxon Valdez still travels the seas under a different name and EM still makes more money than any other company on the planet.

Centuries ago the prophet Jeremiah wanted to know "Why does the way of the guilty prosper? Why do all who are treacherous thrive?" 12:1 NRSV Good questions. While we haven't been jolted by such a graphic disaster in recent years there are examples from Nigeria and Russia and other places where the welfare of creatures, including humans, are secondary to profits. The film Syriana gives us an ominous portrait of a planet where the goals of the companies which extract fossil fuels overrule governments and international law.

As with most of the prophets, Jeremiah wrestled with trusting in God and acting as God's agent with people who didn't want to listen. We can pay attention and care enough to get angry about the ways we are betraying ourselves and the planet. We can ask for the strength to act passionately in Christ's name.

Posted by David Mundy at 1:46 PM No comments:

This Sunday, one of the scripture readings is from Job 38, one of the most poetic passages in the Old Testament. Here is a selection of verses and the website to read the entire chapter.

22‘Have you entered the storehouses of the snow,
or have you seen the storehouses of the hail,
23 which I have reserved for the time of trouble,
for the day of battle and war?
24 What is the way to the place where the light is distributed,
or where the east wind is scattered upon the earth?
25 Who has cut a channel for the torrents of rain,
and a way for the thunderbolt,
26 to bring rain on a land where no one lives,
on the desert, which is empty of human life,
27 to satisfy the waste and desolate land,
and to make the ground put forth grass?
28 ‘Has the rain a father,
or who has begotten the drops of dew?
29 From whose womb did the ice come forth,
and who has given birth to the hoar-frost of heaven?
30 The waters become hard like stone,
and the face of the deep is frozen.
31 ‘Can you bind the chains of the Pleiades,
or loose the cords of Orion?
32 Can you lead forth the Mazzaroth in their season,
or can you guide the Bear with its children?
33 Do you know the ordinances of the heavens?
Can you establish their rule on the earth?
Posted by David Mundy at 3:48 PM No comments:

On Saturday afternoon my wife, Ruth, noticed that the following day, October 15th, people around the world were going to stand up against poverty. While it was a symbolic event, it was also a simple gesture, so in worship the next day we asked the children to stand first, then the roughly 200 adults in the pews joined them in forming a circle around the sanctuary.

Why bother? One of the older children asked essentially that question. What difference does it make? In some respects, none. It doesn't feed anyone or give them medication, or bring back a loved one who has died of malnutrition or AIDS. It is a way of saying together that poverty is wrong and we know it. The bible says it is a sin and just maybe the jolt to our conscience will lead us to practical, compassionate action.

By Tuesday afternoon 23.5 million people had stood up in various ways in a total of nearly 12,000 events around the world. This is a Guinness record I'm pleased to be part of and as one follower of Christ I will do my best to make a difference in addressing poverty.

I have been frantically busy this week but yesterday helped me get in touch with reality.

I attended the funeral for a woman who was almost eighty and did nothing her entire life. Peggy was born with mental and physical limitations so she never married or raised a family or discovered meaningful employment or contributed to any organization.

She was something, someone, nonetheless. She was a child of God, as the minister who conducted the service pointed out with compassion. Her smile, her love of music and simple pleasures touched those around her.

I was there because Peggy was the sister of family friends. I met her years ago but I can't say I knew her. Still, I was touched by what was said at the funeral and reminded that we are loved in Christ as a gift of grace, not as something we earn by virtue of a list of accomplishments.

I went immediately after the service to a hospital where I visited a mother with her newborn baby. This sweet little guy is entirely dependent on his parents and others for every need, but he is already loved and cherished.

Both of these "holy moments" reminded me that I need to keep my priorities straight. A United Church statement of faith says "in life, in death, in life beyond death, God is with us. We are not alone."
Posted by David Mundy at 1:46 PM No comments: 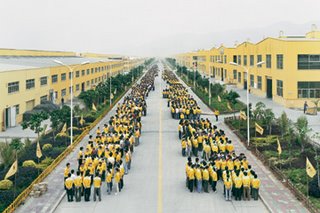 On Saturday I went to a matinee with my wife Ruth for the newly released documentary, Manufactured Landscapes. We have been fascinated by the photographs of Edward Burtynsky which focus on the terrible and strangely beautiful re-working of the natural world by human beings. The film documents a trip to industrial China. One segment focuses on the communities where our old North American computer junk is dismantled by hand so that the small component parts can be melted down for their valuable metals. The result is the degradation of the soil and water in these towns and cities as toxins are released. It also directly affects the health of the workers who use stone-age methods to take apart these high-tech components.

It struck me that the dark side of globalization is my usually unwitting complicity in shipping environmental problems to the other side of the planet. The economic "miracles" of China and India are coming at a great price. As a Christian this is not loving my neighbour, however distant he or she may be.

Is there a solution? Jesus also encouraged us to live simply and to be content with what we have.
My choices may not be the solution, but they can be a beginning.
Posted by David Mundy at 12:00 PM No comments: