Do We Really Need Another Apology? 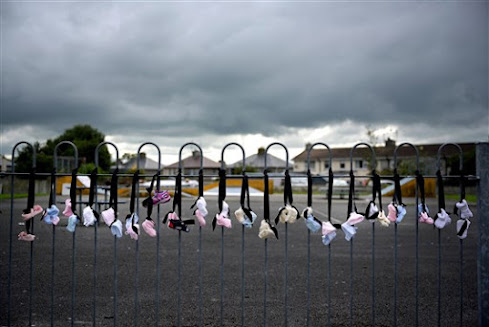 Infant and baby shoes are hung along the playground fence as a vigil is held at the Tuam Mother and Baby home mass burial site on Aug. 25, 2019 in Tuam, Ireland.Charles McQuillan / Getty Images file

Public apologies are popular these days. Our Canadian government has offered up quite a few, as has our United Church of Canada. Some of the recipients of these expressions of contrition are justifiably cynical. Indigenous peoples suggest that fewer apologizing with more respect and constructive action would make a greater difference in their lives. Just the same, saying sorry can draw attention to historic and current injustices, and at least sometimes leads to reparations and reform.

Not long ago I wrote about an apology by the United Church Last November to women who spent time in denominational maternity homes and were often shamed into giving give up their newborn children for adoption. I support this apology first of all for the sake of those who were emotionally abused and robbed of the opportunity to raise these children. The apology also educated me about an aspect of the United Church of which I had no previous knowledge. I need to see and hear about this.

Yesterday the Irish Prime Minister, Micheal Martin,  apologized for an even greater wrong, the horrendous history of mother and child homes in that country, and did so in conjunction with the release of an extensive investigation and report. Of the more than 50,000 children born in the homes approximately 9,000 died. The Irish government said the report revealed the country had a "stifling, oppressive and brutally misogynistic culture" and again the church -- in this case the Roman Catholic church, perpetrated this crime up until the last home home was closed in 1998.

Facing the truth of grievous wrongs is rarely easy, but absolutely necessary. Repenting of sins, past and present, personal and collective, is essential Apologies are inadequate on their own, but may be the first step in reconciliation and restitution.

I must say that when I heard of the thousands of deaths of innocent children my blood boiled at the thought of sanctimonious priests (a small percentage) who claim that they are pro-life (actually anti-abortion) that they told voters in the United States that if they didn't vote Republican in the last election that tthey weren't Christian heir souls would be in peril. This view was not supported by most bishops, nor the pope, but it was the height of hypocrisy and arrogance in my estimation. Didn't Jesus say something about removing the log from our own eyes first?