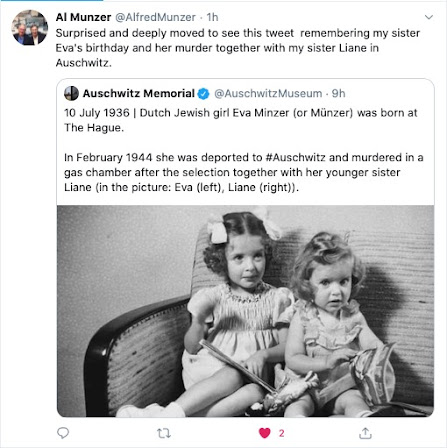 Earlier this year I began following the Auschwitz Memorial Museum  on Twitter, probably because I'd seen someone else's retweet and I was curious. I soon realized that every day, often several times, the site posts the stories of those who perished at this Nazi extermination camp. I was tempted to unfollow because the photos of those who were murdered and the information accompanying them was so bleak. But I decided to continue, and I usually spend what amounts to a few seconds to learn more about the innocent Jews of all ages, along with others, who died in the gas chambers of a fascist regime.

Since the terrible invasion of the US Congress last Wednesday thousands of people have visited the online tutorial about the Auschwitz death camp provided online by the memorial. In fact, in 2020 roughly 7,500 visitors accessed the information while nearly 7,000 did so on Thursday alone.

There were many racist, violent messages which were displayed during the invasion, including a Confederate flag. One of the most offensive was the White Supremacist sweatshirt on one of these "patriots" with the words "Camp Auschwitz." All of this is a stark reminder of the festering, corrosive power of hatred which the Emperor Trump has encouraged in America. 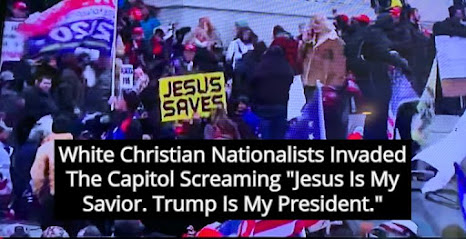 There were other offensive banners and messages which were religion-based, including Jesus Saves. Of course that message should be a powerful declaration of hope, but it was co-opted to support the opposite. I didn't see any banners saying Jesus Loves because the sacrificial love of Christ which transforms hearts and minds was not the goal of these domestic terrorists.

We need to remember that during the Nazi era in Germany many Christians stood against what transpired, and some of them died because of their courage. There were others who twisted the gospel message in order to support Hitler's evil regime.I pray that what happened last week in Washington will not be repeated in the days ahead, and that Christians who support what unfolded will repent and follow Jesus, the Jew, the Saviour. 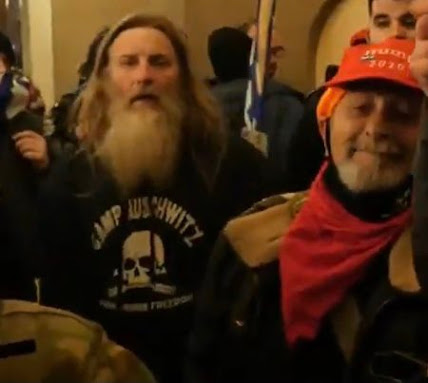 What a shock it was to see what happened in Washington a few days ago. Or was it? With 70 million Americans voting for a vile, hateful and divisive narcissist who is a pathological liar, all bets were off. It underscores just how much hatred is alive and well in the US.

Could you imagine if the crowds storming the Capitol Building had been Muslims or Blacks? Half the National Guard would have been called out, and a lot more shots would have been fired. But a bunch of brainless white rednecks invade and for some reason there weren't enough security forces to handle it. Seems a little fishy to me. Oh wait, perhaps because some(not all!) of the security forces were sympathetic to this mob.

Let's not kid ourselves, I would bet a good number of law enforcement officers in the US are pro Trump and some of them probably would have been happy to be storming the Capitol themselves. And as a retired police officer myself, that is a hard thing for me to say.

It would have been a blood-bath if the invaders hadn't looked like the cast of Duck Dynasty and Chewbacka.

I think your observation about some of the law enforcement officers, both those who chose insurrection and those who let it happen, is grimly accurate. At the same time we can remember that the officer who died in the line of duty was a Trump supporter. He died protecting the institutions which the fascist emperor undermined. Thanks Roger.