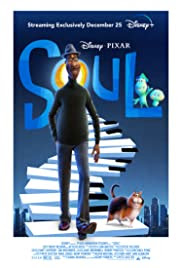 Not that I am referring to being in need; for I have learned to be content with whatever I have. I know what it is to have little, and I know what it is to have plenty. In any and all circumstances I have learned the secret of being well-fed and of going hungry, of having plenty and of being in need. I can do all things through [Christ] who strengthens me.

Yesterday evening, which was New Year's Eve, we watched the new, buzzy, Pixar/Disney animated film called Soul. The title is a reference to music, although the principle character is a jazz pianist named Jerry who is languishing as a middle school teacher as he waits for his big opportunity. There is also the eternal soul which is imagined in a "spiritual but not religious" way. Jerry gets his big break only to...well, let's just say he ends up encountering an apprentice soul, of sorts, and both drama and humour ensue.

Number 22, the soul-to-be is resistant to the role, while Jerry desperately wants to keep body and soul together. The former figures she has no purpose while Jerry wants to fulfill his. The soul trainee eventually has an epiphany which helps her to appreciate that "regular old living" is our grand purpose, and we never really know where that will lead us. We just accept that being "ready to go live" is what we're all called to do.

Pixar films are always extraordinary in their animation and Soul is no exception. The human cast includes Jamie Foxx and Tina Fey and Angela Bassett, which is wonderful. I wasn't as knocked out by the film as I thought I might be, but a combination of hype and sleepiness might have taken the edge off what is a really imaginative story.

This morning I woke up thinking of the adage "Life is what happens to you while you're busy making other plans”, coined by Allen Saunders in the 1950's and later included in the lyrics of John Lennon's song, Beautiful Boy. It's the message of Soul, in some respects, and timely.

Most of us learned in 2020 that our plans and purpose in life can quickly be rerouted. As we came to the end of the year lots of people were literally cursing the past twelve months or claiming we should forget about them.

There was so much I didn't like in 2020 and there was too much sadness and loss for so many. Still, we were also able to do lots of "regular old living" for which I'm grateful. Instead of anticipating what was going to happen down the road we discovered, by the grace of God, that our purpose could be finding meaning in the day we were in. That's significant soul work, when all is said and done.

I think the apostle Paul had it right about God's strength and provision. Let's savour the "regular old living" of 2021, whatever the year may bring.

Living one day at a time, and not making any BIG plans seems to be the order of the day ....

It does, and ultimately the day we're living is that only one we can influence. Thanks Judy.