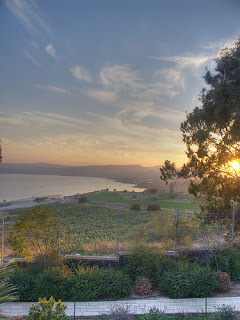 "Better late than never" when it comes to George Bush's recent visit to Israel and the Palestinian territories? He was there as a broker of peace between adversaries in that troubled region, so we will try to forget that he has waited until the end of his presidency to take an active and personal role in this process.

What I did find jarring was President Bush's visit to the Church of the Beatitudes on the northern shore of the sea or lake called Galilee. I have visited this spot several times and love it not so much for the church itself but for the view it affords down the hillside and out over the water (see above.) When there I can imagine Jesus speaking to a crowd of poor nobodies, telling them that they are blessed somebodies who can be agents of peace and humility in a troubled world. Because they are God's people they have an unseen wealth and power.

The visit by Bush came in the same week that a new report says that 150,000 Iraqis have died since the beginning of the ill-fated war which began in 2003. A war that was initiated on the basis of false information and fear. It appears that the American people recognize this war as a dark moment in their history. Neither Republican nor Democrat candidates include the subject in their speeches or debates. The movies on the war are box office disasters. Who wants to be reminded of the mess?

We all know that Saddam Hussein was a monstrous man who imposed a reign of terror. The estimates are that 300,000 people died during his regime but of course that was over decades. Didn't Jesus also say "do not repay evil with evil?"

What was Mr. Bush thinking and praying as he visited the Church of the Beatitudes? Perhaps he allowed himself to repent of his sins and listen for the voice of Jesus. I hope so.
Bye the way, the church was built with financial assistance from fascist dictator Benito Mussolini. God moves in mysterious ways.
Posted by David Mundy at 10:38 AM