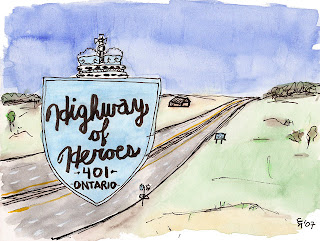 We were on our way home from a walk this afternoon when we drove over Highway 401 at Waverly Rd. People were gathering on the overpass in anticipation of the motorcade carrying the body of the latest soldier killed in Afghanistan. Those gathered want to pay their respects as the funeral coach and other cars travel what has been named the Highway of Heroes. Canadians flags had been erected on the bridge as a tribute.

Oddly, this is the third time we have happened upon one of these impromptu assemblies, each time as we were heading to or from a walk. In the summer we ended up driving parallel to the motorcade on the service road. We were deeply saddened that day, as we have been on each occasion. We talked about our son, age 25, and how devastating it would be to lose him to war.

John Manley and a team of independent fact-finders published a report this week on the Canadian military involvement in Afghanistan. The report was fair and honest and told us that there is no easy "stay in or get out" choice. It is much more complex and uncertain. I spoke about this last November 11, which happened to be a Sunday. The exhibit at the War Museum in Ottawa points out what an important role Canada and other nations invited into Afghanistan are doing in this beleagured, desparately poor nation.

There are no easy answers. In the meantime young Canadians will die there and people will salute as their caskets pass by and we will pray for the grieving families. God be with them.
Posted by David Mundy at 4:00 PM