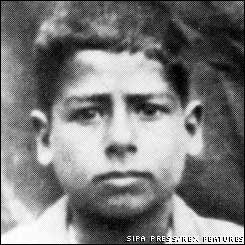 Saddam Hussein as a boy

I had to watch the Sixty Minutes interview last night with the FBI agent who was assigned to develop a relationship with Saddam Hussein while he was in custody. His goal was to break down the barriers of suspicion with the disgraced Iraqi tyrant and gain valuable information about his years in power.

It worked. Slowly but surely he gained Saddam's confidence. Day after day they talked. The agent discovered that there were no weapons of mass destruction when the US invaded Iraq, although Saddam considered redeveloping the program dismantled under the UN. He did order the poison gassing of innocent Kurdish villagers and felt no remorse for doing so. Evil.

Saddam also wrote poetry, relentlessly. He wanted to have a garden, so he was provided with seeds. He admitted to his young interrogator that he felt he had grown closer to him than he had been to his own adult sons who died when cornered by US forces. When the interviews came to an end Saddam embraced and kissed the FBI agent farewell and tears came to his eyes. In other words, he was human, at least to a certain degree.

That's the problem with evil. It is always "evilish." My experience working as a chaplain for a summer in a maximum security prison taught me that rarely are people "bad to the bone." Even murderers and child molesters can exhibit what we consider positive human traits. Those few months were life altering for me.

Perhaps the key is the way in which we give ourselves over to evil and our willingness to repent, to express remorse and turn in a new direction. In the end Saddam said he was ready to die because he had lived a good life and had no regrets. He obviously deluded himself.

Will God have mercy on his soul?
Posted by David Mundy at 8:53 AM