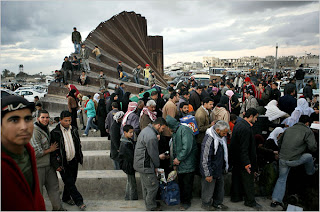 The Gaza Strip is one of the most densely populated territories in the world. It is only 40 kilometres long and ten wide, yet roughly one and half million people live there. In 1948 only 80,000 people lived in the same area. Sixty percent of the population live in poverty and hundreds of thousands are not connected to water and sewage. In recent decades there has been a daily migration in and out of Gaza as people travel to Israel to work at jobs that tend to be low-paying, menial labour. The underlying tone is misery and only from time to time do we get glimpses of life there. Often the borders are sealed for security reasons making daily life even worse.

Yesterday an estimated quarter million people "escaped" by knocking down sections of the security wall between Gaza and Egypt. People went on a rampage -- a buying rampage-- in Egyptian stores, buying the essentials of life which weren't available in local stores. Israel had cut off the flow of supplies into Gaza, including fuel to run the electrical generating plant.

I won't "take sides" on this issue because the presence of groups such as Hamas within Gaza are of real concern to peace. It is still a deeply discouraging situation for those who live in the territory. I heard an interview with a person on the street who said "we just want peace."

A former moderator of the United Church, Bob McClure, was a medical doctor who worked in Gaza and saw it as a place where too many young people lived without hope. When he made this comment almost a generation ago he could not have known how desperate circumstances would become, but he was prophetic. Hopelessness leads to despair and despair to violence.

I encourage you to pay attention to what is happening there. Whatever our own political leanings, the day-to-day lives of so many people are bleak and unfair. We can pray that the prosperous nations of the world will figure out how to provide resources to improve the dismal reality.
Posted by David Mundy at 2:18 PM