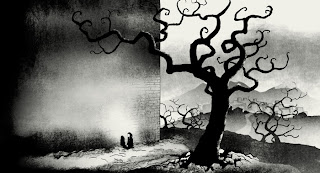 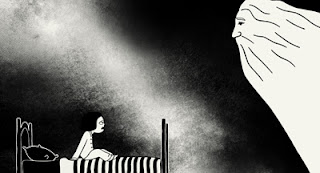 Marjane Satrapi was born in Iran when the last Shah was still in power. His regime was an oppressive one under which people who opposed him were jailed. Yet once he was deposed the number of political prisoners and executions increased exponentially. Under harsh Islamic rule women became second class citizens. Satrapi wrote about her experience in a graphic novel and now there is a fascinating film based on her story.

It is called Perspolis and it is unique in that it is animated. As improbable as it sounds, this black and white animation is beautifully, expressively done. We weren't sure if we could trust the universally positive reviews but it is an excellent film.The story is captivating and informative about those dark days.

Satrapi includes God in her reminiscence, a God who is very male. She ends up rejecting this God because of the suffering inflicted on family members and friends. Of course all women in the Iran she describes live restricted lives because of the way God's law was and still is interpreted. Unfortunately religions tend to do this, pushing women into subservient roles. Equality before God seems to be a concept men are slow to accept, although it can and does happen.

Who knows whether Persepolis will ever come to this end of the GTA, but it well worth seeing.
Posted by David Mundy at 12:55 PM