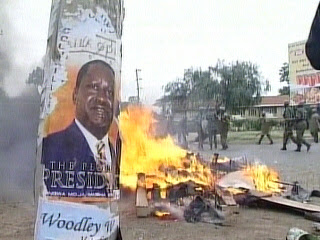 Kenya is one of the most stable nations in Africa with a progressive education system and growing economy. The recent post-election violence threatens that well-being and has resulted in so much destruction and death. The immolation of more than 50 people in a church, including women and children, was a horrific act of violence. It was chillingly reminiscent of Rwanda.

In Pakistan the January election has been postponed, supposedly because of the instability following the death of Benazir Bhutto. What a mess.

Do we realize how fortunate we are in this country? This year, 2008, may be an election year in Canada and we can pray that Canadians exercise their right to vote. On Remembrance Sunday last November the congregation was surprised when a member stood up and offered an impromptu plea to act responsibly and vote in elections. He was responding to something I had said in the sermon and while it caught us all off guard what he was saying was true.

We tend to think of politics as secular and even profane, but there is a sacred responsibility in our freedom of choice.
Posted by David Mundy at 9:01 AM