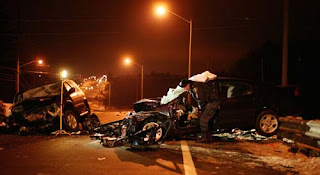 Rob Ramage got drunk, climbed in behind the wheel of a car, then crashed into another vehicle killing a good friend and badly injuring the other driver.

This is a grim story and sounds even worse because of the way I wrote it. These are the facts. As usual it isn't that simple, although Ramage has been convicted of and sentenced for his crime.

Ramage is a former NHL hockey star and the friend was Keith Magnuson, another long-time NHLer. By all accounts, including the summation of the judge, Ramage has been a exemplary citizen. He is a pillar of the community and has a successful business. He is loved by his family and friends, including the family of Keith Magnuson.

The Magnuson family pleaded with the judge to be lenient, feeling that Ramage could do more good speaking about the consequences of impaired driving rather than spending time behind bars. The judge decided that the crime was too serious to go without the consequence of prison time and sentenced him to four years. Ramage will appeal but he thanked the Magnuson family for their forgiveness.

I am fascinated by forgiveness because it is at the heart of the gospel of Jesus Christ. I sometimes find it hard to do, and it is one of the areas that parishioners struggle with the most. Lives get smashed, head-on, and it is hard to clear away the wreckage. The scars aren't always visible, but they are there. A person from a previous pastoral charge contacted me recently saying that she is seeing a counsellor about forgiveness for those who caused her pain in childhood -- what resources did I have? She struck me as a fairly quiet but positive person (still does) but there are wounds from the past which need healing in mid-life.

I just picked up a book called Amish Grace: How Forgiveness Transcended Tragedy which has received positive reviews. I will probably let you know more about it.
Posted by David Mundy at 2:04 PM