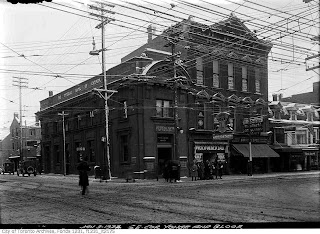 I can't save a written blog entry for another day so I will offer up my thoughts for tomorrow at the end of this work day.

Last Saturday I was standing at the corner of Yonge and Bloor streets in Toronto, one of Canada's busiest intersections. I waited for the light to change and started thinking about the plan to try a "scramble" at this corner. When the lights go green they will all go green so pedestrians cross the intersection in any direction. Although it sounds chaotic, it is working in other major cities around the world and it encourages and protects those who are on foot.

As I headed west along Bloor I thought about all the changes and innovations at that corner through the years. In George Brown's day Yonge and Bloor was an important crossroads in the midst of farmland. In the photo above from 1924 there were streetcars, and by the next year the first crossing lights had been installed. The subway opened in 1954 and the other line a few years later. The streetcar wires are long gone. The geography remains the same but the landscape and the ideas keep changing.

I figure this has to be the same for the church. Nostalgia is nice, but it doesn't help us live in the present or plan for the future. Not only do our buildings change, our ideas are renovated along the way. Some changes are great and others silly but we only find out by doing.
We still follow Christ to get our bearings, but how we get from "point A" to "point B" will be different, and that's okay.
Posted by David Mundy at 4:00 PM