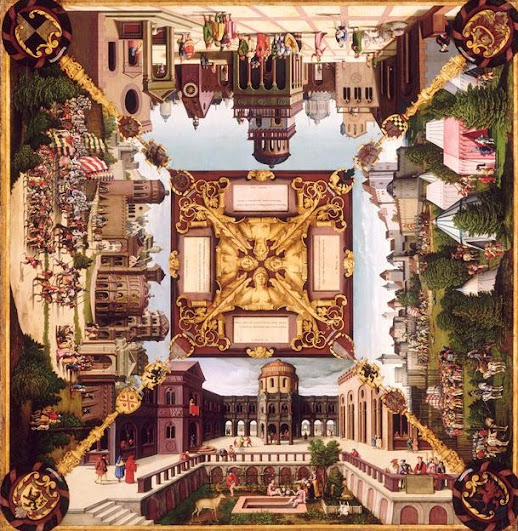 History of David in four episodes -- Hans Sebald Beham 1534
Over the past few months a host of museums and art galleries around the world have offered virtual experiences of their collections, including the Louvre, in Paris. I first visited this extraordinary art museum at age 19 and I've returned on a couple of other occasions. Recently I read a piece by someone who'd had the privilege of wandering the Louvre, virtually alone, which was not that far off my own experience as a teen when I meandered through the galleries for hours and hours.

The article prompted me to look online and I discovered an exhibit of art from the Louvre collection featuring my namesake, King David. As you'll know, David is a big deal in the Hebrew scriptures and the gospel writer, Matthew, tells us that Jesus is a descendant of this charismatic, courageous, and flawed figure. David was a freedom fighter who rose to power, only to allow this to go to his head -- and other body parts -- as he became a womanizer and complicit in murder. It took a brave prophet, Nathan, to challenge the king, who repented of his sins. Psalm 51 is used on Ash Wednesday as a reminder than even the mighty need God to keep their arrogance and the headiness of power in check.

When I perused the online Louvre exhibit I was delighted to discover a piece which I have searched for over the years, to no avail. I recalled seeing a Renaissance artist's depiction of events from David's life from above, including what was essentially his rape of future wife Bathsheba. I began to wonder if it was a figment of my imagination, but there it was! It turns out that it is a table top created nearly 500 years ago for a bishop. It's astonishing that these pieces survive the vagaries and ravages of time and regimes.

Today many of us are praying for the democratic overthrow of an arrogant, unrepentant tyrant wannabe who has made sure that no one close to him would speak "truth to power." David is a figure who has a legacy after 3,000 years which is more than infamy because of his humility and repentance, not because of his hubris. We'll see!