Eagles Wings and an Election 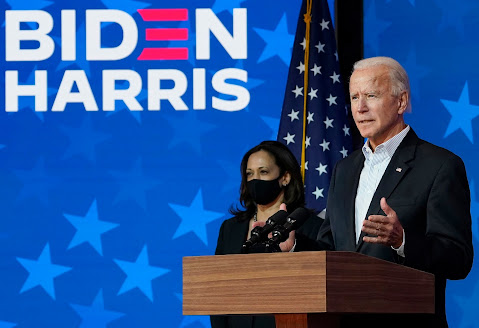 Last evening President-elect Joe Biden and Vice President-elect Kamala Harris spoke before a jubilant crowd to acknowledge the outcome of the US election. There was a degree of American glitz as 77-year-old Biden trotted down a runway as though he was an aging football hero being recognized before the Superbowl. The speeches by both Harris and Biden, were inspiring, articulate and blessedly free of grievances and conspiracy theories.

Both of them are people of faith, even though they have been characterized otherwise, and Biden will become only the second Roman Catholic president in the history of the US. He attends worship on a regular basis and says that his faith has sustained him through life's losses. Biden's first wife and young daughter were killed in a car accident decades ago and he lost a son to cancer. These experiences would be enough to embitter most of us, but he embraces life.

At the end of his speech which was under 15 minutes -- imagine a presidential speech which was succinct!- Biden quoted scripture twice. The first reference was to Ecclesiastes 3, the passage which speaks about their being a time and a season for everything, including both living and dying.

The other was the hymn adaptation of psalm 91 which many of us know as On Eagles Wings. It was written by Michael Joncas, a Roman Catholic composer, in response to the sudden death of the father of a good friend. Through the years it has found a home in various Christian traditions, and it is in a hymn resource of the United Church called Voices United as a version of  psalm 91.

It's interesting that in a moment of victory and celebration Joe Biden did draw on scripture which has meaning for him and both passages are often used at funerals and memorials. This says to me that he is someone who understands loss and will be able to express empathy and compassion from the wellspring of his personal faith. Let's hope so. It is urgently needed in the United States right now.

It's surreal to see how caught up the world was in the American election. It seemed the planet was collectively holding its breath, awaiting the outcome.

American elections have always been of interest to everyone because the US is so powerful and influential. But when was the last time there was this much tension in their election? Certainly not in this generation.

The dancing in the streets, the singing, the cheering, and hugging after Biden was announced President was incredible. And I'm just talking about what happened in my household!

It was as if they were celebrations of an end to a war or to fascism. Perhaps they were.

I'm filled with hope. The climate crisis can once again be taken seriously by an American leader, and thank goodness we won't have to spend four more years listening to the garbage that spews out of Trump. He just needs to slither away. Better yet, be imprisoned.

Trump's raging narcissism and moral bankruptcy drives many of us crazy, as do the throngs of supposedly Christian supporters. I am convinced that the removal of Trump brings hope regarding addressing the climate emergency which his regime actually worsened. Thanks Roger.

I think it may require military personnel to force him out of the White House - he is totally blind to the concept of losing, for himself.

There are probably lots of Americans who would enlist to help the process!