What is "a Sustaining Faith" Alex? 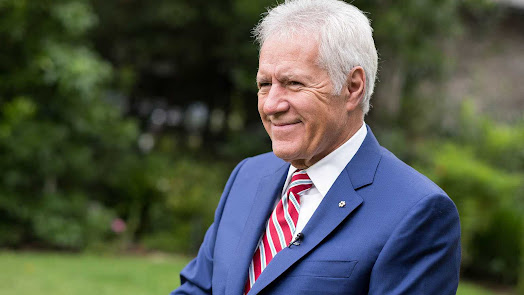 After a lovely paddle at Bon Echo Provincial Park yesterday we got into our vehicle to hear the tail end of a news report listing the accomplishments of Jeopardy game show host, Alex Trebek. We were certain that this was not good news and within a few minutes we'd ascertained that Alex had succumbed to the pancreatic cancer he'd battled so valiantly, although in an understated Canadian way. It was a shock because he was on the air Friday evening, but of course that episode was taped several weeks ago.

It seems that Trebek has become more of a Canadian hero in recent years and particularly since his cancer diagnosis. We were all amazed that he continued to work through his chemotherapy and joked about fulfilling his contract for a couple more years. It's surprising how many people of all ages have come to enjoy Jeopardy. Our younger daughter, Emily, never struck as a candidate for Jeopardy nerd-dom, but she has become an enthusiastic fan and is a strong home contestant.  Back in the days when people actually went to an office to work she had a Jeopardy calendar on her desk and her young colleague stopped by each day to test their knowledge. Jeopardy is the one show I really don't like missing, and while sometimes I mutter "c'mon Alex, you have all the answers!" when he was a little condescending to a contestant, he really was an excellent host. 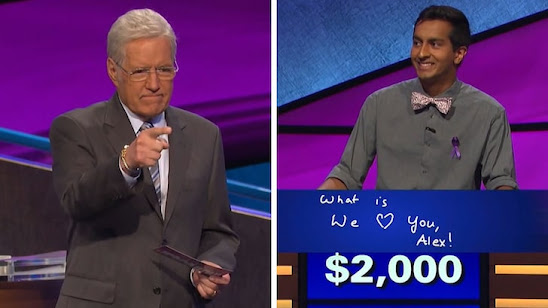 During interviews after he announced his cancer Alex nearly always mentioned the importance of faith, along with the prayers of many, in sustaining him through the challenges of the disease. I was disappointed that interviewers didn't delve deeper into what this meant to him, perhaps a comment on our secular age. Guideposts magazine mentioned his comments in the video posted to his Twitter account in March of last year:

There were moments of great pain, days when certain bodily functions no longer functioned, and sudden massive attacks of great depression that made me wonder if it really was worth fighting on. But I brushed that aside quickly because that would have been a massive betrayal–a betrayal of my wife and soulmate Jean who has given her all to help me survive. And it would certainly have been a betrayal of my faith in God and the millions of prayers that have been said on my behalf.”

Trebek continues to rely on prayer and his faith to keep him motivated and uplifted, which he noted while accepting Fordham University’s Founders’ Award in January. As stated in Fordham News, he said, “If there’s one thing I have discovered in the past year, it is the power of prayer.

I appreciate Trebek's honesty and witness about what his faith meant to him. During my ministry I was inspired by the courage and sustaining faith of so many who walked through the valley of the shadow of death, even though they weren't celebrities and their stories weren't widely known.

Thanks, Alex Trebek, for entertaining us through the years and for your faith.

Any other Jeopardy nerds out there? 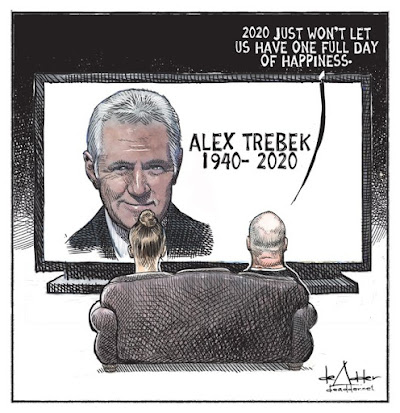 Definitely a Jeopardy fan, and always a humbling experience very night at 7:30. I'm not sure there would ever be an episode in which I'd make it to Final Jeopardy.

At least Alex got to see Trump lose in the election. I have a feeling he was satisfied with the result.

What is, thanks for the response, Roger. I agree that he likely wasn't a Trump fan.

Jeopardy has helped to keep me sane through COVID days ... I talk back to the television these days ! I will miss Alex. A gentle, classy soul !