Congregations and Their Veterans 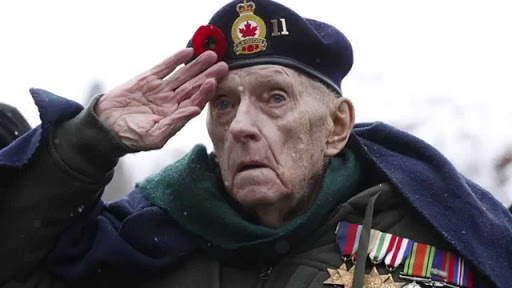 In one congregation I served I visited a tiny, crotchety man who never got out to church because he was dependent on an oxygen tank and had mobility issues. His beloved wife had died years before I came on the scene and his daughter lived at a distance, so he spent a lot of time alone. I came to realize that he was also anti-social and didn't like change, including the fact that my predecessor was a woman. It didn't matter that she was a very effective and beloved minister.

Despite a rocky start we ended up getting along and he became more open about his experiences in WWII. Initially he failed the medical because he was 5'4" short, and weighed next to nothing. He was determined though and attempted to enlist again. It was decided that he would actually be ideal for the tank corps because he was so small and was literally a good fit for a confined space. He had some harrowing experiences along the way and he was grateful that he survived. In old age he was frustrated that it was so much work to get support from Veterans Affairs, although he saw the irony in the fact that as many of his contemporaries died there were more resources for those who remained.

I'm grateful for the veterans and their spouses in all my congregations, including the war bride widow in outport Newfoundland who came from England and never ventured more than a few kilometres from the remote fishing village of her husband after she emigrated in 1919. She never saw her family again.I even had an ancient WWI veteran with a wry sense of humour in one of my earlier congregations.

I also had contemporary military veterans in some of these churches and a handful of active service personnel, including a teen who joined the navy and another who served as a peacekeeper on the Golan Heights

I was always moved by the sight of the increasingly tottery veterans of past conflicts who carried the wreath on Remembrance Sunday. Some of them walked with a cane, so we would invite a child to assist with the wreath. It was powerful to see young and old together, and I won't forget.

This was a different Remembrance Day for me on a couple of notes, and I'm not referring to COVID preventing gatherings.

My father was a WW2 veteran and passed away this Thanksgiving, and on past Remembrance Days I always made a point of speaking to him about his experiences in Burma during the war(the last few years had been more difficult with his dementia). He enjoyed telling me the stories of being an eighteen year old trying to stay alive in deplorable conditions.

Retiring earlier this year, this Remembrance Day was also the first in many years that I didn't participate wearing the RCMP red serge. It was always a highlight to march with the veterans and see and hear the appreciation of the community towards the vets. And of course I was always happy to chat with these heroes long after the end of the service.

COVID is a strain and stress to everyone, but I constantly remind myself that it pales in comparison to what our war vets had faced.

Yes, a very poignant year for you, Roger, with the loss of your Dad and your own change in circumstances. As a son and son-in-law of veterans who are long gone to their eternal reward I too remind myself that there is no room for complaining during these trying days. Shalom in the midst of your memories.