Justice for Bedouins in a World of Turmoil 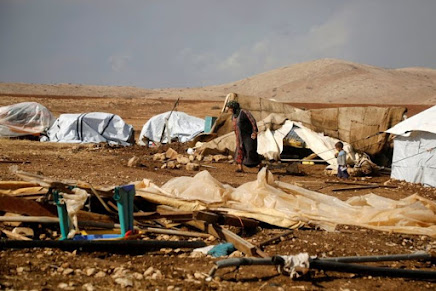 On the day of the election in the United States, when the eyes of the world were on the outcome, Israeli b.ulldozers demolished a Bedouin village in the area known as the West Bank. Bedouins are traditionally nomadic people but they do establish settlements for periods of time, often living in tents while using solar panels and availing themselves of the internet. The Israeli government has been involved in a program of destroying "illegal" Bedouin settlements for more than a decade, determined to concentrate tens of thousands of  Bedouins in small geographical areas. It sounds chillingly similar to what happened to Indigenous peoples in North America who ended up on reserves and reservations.

On November 4th tented homes, shelters for animals , latrines and solar panels were among the structures destroyed in the village, according to the United Nations. By Thursday morning the residents had already moved back to the site, using tents donated by Palestinian aid groups. According to an article the next day in US News and World Report:

"They want to expel us from the area so that settlers can live in our place, but we will not leave from here," said resident Harbi Abu Kabsh, referring to the roughly 430,000 Israeli settlers who live alongside three million Palestinians in the West Bank, which Israel captured in a 1967 war...Yvonne Helle, a humanitarian coordinator for the United Nations in the Palestinian territories, said that relief agencies had visited Khirbet Humsah and recorded 76 demolished structures, "more than in any other single demolition in the past decade". Israeli human rights group B'Tselem said the structures included 18 tents and sheds.

For decades the United Church of Canada has spoken out about Israeli settlements in the West Bank and the heavy-handedness of the military in evicting Palestinians from their traditional lands, Because of this we have been accused of being anti-Jewish, which is not the case, and of supporting terrorism, which is nonsense. We have long been committed to interfaith dialogue and cooperation. The UCC's objections have been to injustices which have been condemned by the United Nations and many Western governments. Sadly, the current right-wing government in Israel has been emboldened by the Trump administration and the support of evangelical Christians in the United States.

It would be wonderful if the corrupt Benjamin Netanyahu was finally evicted from office. And we can pray that the Biden administration will return to policies which are more measured than under the Emperor Trump. His administration's "Vision for Peace" in the region has been anything but, Why would we surprised by this?

In the midst of many other pressing problems in the world this still matters and people of good faith can stay informed and hope that peace and justice will prevail.

I give full credit to the UCC for voicing their objections of these settlements. It seems that as soon as you criticize the Israeli government you are deemed as being anti-Jewish, which is nonsense.

There are too many obstacles to the two-state solution, and the vile Netanyahu is probably one of the biggest. Get rid of him, the orange blob down south, and it would be move in the right direction.

I also am concerned that if PC leader O'toole becomes our Prime Minister one day, it would be a step backward. He's been talking about moving the Canadian embassy from Tel Aviv to Jerusalem. Talk about yet another punch in the stomach to the Palestinians.