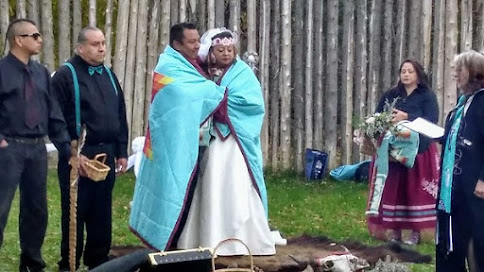 When we lived in Northern Ontario I served a larger downtown congregation in Sudbury. A couple began attending worship and approached me about presiding at their wedding. While they were both Christians and wanted a Christian ceremony, she was Indigenous and hoped to incorporate aspects of her First Nations heritage in an outdoor ceremony. I agreed, with the provision that is we were outdoors we had the option of shelter, should the weather be inclement. It was a good thing because the rain teemed down that afternoon. It was so intense that it crept in under the protective tent where the ceremony took place!

I thought about this couple when I saw news that the Marriage Act is being revised in Ontario to include Indigenous ceremonies. It surprises me, given that the Marriage Act includes religions other than Christianity, as well as secular marriages,that there is no specific provision for Indigenous ceremonies. I suppose I shouldn't be surprised since we have so consistently marginalized Indigenous customs and spirituality for centuries in this country.

The changes in the Marriage Act will allow a person to solemnize a marriage in Ontario if they belong to the band, a First Nation, Metis settlement or Inuit community and for communities to designate persons as officiators. Ceremonies can include Indigenous languages and the subtleties of culture and spirituality which those languages denote.

This all makes sense to me. What do you think?

Oh yes, the Sudbury couple found me as they were celebrating their 20th anniversary, so their vows "took" despite the wedding day deluge.

Just another example of how the arrogance of our ancestors and white supremacists in general have devalued aboriginal peoples and their ways over the centuries.