A Candle of Hope on Rosh Hashana 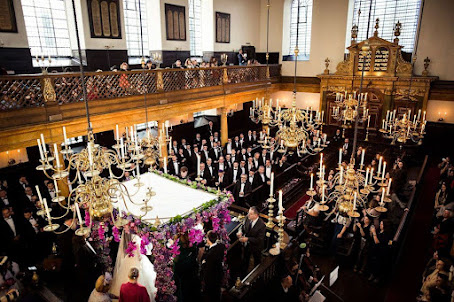 Bevis Marks was built in 1701 and is the only non-Christian house of worship in the City of London.

Today marks the conclusion of Rosh Hashana, the Jewish New Year, an annual celebration which commenced Monday evening. “Shanah Tovah” or Happy New Year to any Jewish readers. I figure it's important to note important commemorations and celebrations in religions other than my own, which is Christianity. People of faith mark the seasons in ways that are unique and meaningful and which often maintain their spiritual significance. Through the years I have been dismayed at how first Christmas and then Easter have been commercialized and secularized.

I am thinking of an ethnicJewish congregation in London, Great Britain called Bevis Marks today which is struggling for survival and an uncertain year ahead. Their synagogue is likely the oldest in continuous use in Europe, establlished in 1701 after Jews were allowed back into England by Oliver Cromwell, following their banishment by Edward I in 1290 -- I didn't know about this expulsion, did you?

Developers have proposed to build a 21-storey building on Creechurch Lane and a 48-floor tower in Bury Street which the synagogue trustees argue would block out nearly all sunlight on the building, except for one hour a day.

Such a move would make services "almost impossible" as the synagogue is currently only lit by up to 240 candles and some electric lighting which was installed in 1928. It cannot be added to due to planning restrictions on the building, the trustees claim.

Shalom Morris, rabbi for Bevis Marks, said the proposed towers "would be catastrophic" and the "very survival of our great synagogue as a place of worship is at stake". "Not only will light be blocked, on which the building depends for ambiance, spirituality, and atmosphere, but the very foundations will be at risk," he said.

The last congregation I served before retirement,  Bridge St. UC, actually resisted the request of a condo developer to excavate beneath a portion of the church physical plant for its foundation and if the structure is eventually built it will block the natural light which illuminates a significant stained glass window behind the choir. This is all supposedly progress but it isn't, in my estimation.

Authorities in London say that a final decision hasn't been made and perhaps decency and respect will prevail. I'm not holding my breath, but perhaps I'll light a candle of hope.