The Loving Eyes of Tammy Faye 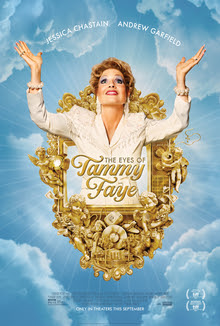 Ten days ago I received an email from one of the faith-based organizations I follow offering the opportunity to watch the film The Eyes of Tammy Faye. This is a Toronto International Film Festival movie and while it screened in TO it was also online as part of the hybrid format. We watched this dramatized depiction of the lives of Tammy Faye and Jim Bakker, the televangelists who eventually fell from grace due to hubris, greed, and sexual impropriety. Jim did jail time for financial malfeasance but he's back on televison at age 81 and still a scam artist.

Tammy Faye died of cancer at the age of 65, and she left this life as the butt of endless jokes because her penchant for heavy makeup turned her into a clown figure. She is portrayed by Jessica Chastain who is excellent in the role and whose performance lifts a film which is up and down (still well worth watching.)

The premiere at TIFF received a standing ovation and I imagine that it was because of Chastain's sympathetic portrayal of a woman who overcame poverty and personal rejection as a child to become a beloved figure to their huge audience. 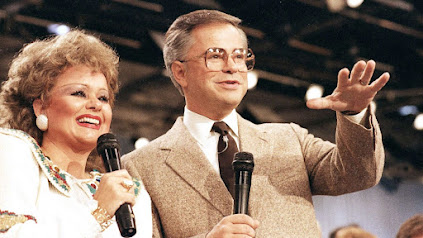 The Bakkers in their Heyday

The film reminds us that so much of the "health and wealth" gospel is a pyramid scheme with an off-kllter halo, and the Bakkers were pioneers in the media-savvy version of Christianity which is actually antithetical to the gospel. Bakker deserved to go to jail, as do many of his successors.

Tammy Faye genuinely cared about others and was convinced that God loved everyone. In the homophobic milieu of the evangelical Christianity of the 70's which persists today she was remarkably open-minded and welcoming. One scene in the film depicts the hour on one episode she devoted to an interview with a man living with AIDS and who was open about his homosexuality and convinced that God loved him.

Tammy Faye agreed “I refuse to label people,” she said in a 2000 documentary with the same name as the current film -- “We’re all just people made out of the same old dirt, and God didn’t make any junk.”

Tammy Faye became something of a gay icon, part parody, part appreciation, and ultimately support. In the final interview before her death she said, “When we lost everything, it was the gay people that came to my rescue, and I will always love them for that.”

The Bakkers' son, Jay, who has been a progressive pastor and supportive of the LGBTQ+ community, endorses the film and feels it humanizes his parents, despite all their flaws. He certainly loved his mother and her portrayal does honour strengths as well as foibles. 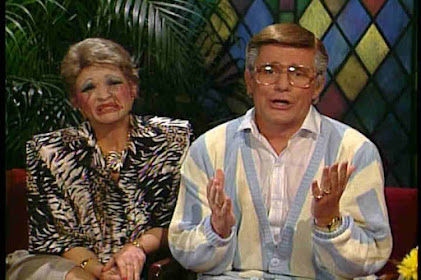 Saturday Night Live Parody of the Bakkers
Posted by David Mundy at 10:39 AM