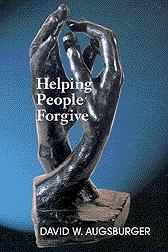 It occurred to me recently that I'm coming up on the fifteen anniversary of my Lion Lamb blog which I began on the encouragement of a young member of my congregation at that time. I got going with some trepidation and got into the daily rhythm of reflection, always with a faith theme or allusion. I have averaged about 300 blog entries per year for a total of 4,500 or so, and with my Groundling blog entries the number is above 5,000. In a way blogs are now old-school social media and reading even a few paragraphs takes more mental energy and focus than most of the successors. I am deeply grateful for all of you as readers and I'm regularly surprised to discover who follows this blog even though the comments are few.

Here is my first blog entry from 2006 which is on a subject I have addressed on many occasion in sermons and in study groups, as well as blog entries. Christianity is a religion rooted in forgiveness and God's accepting, reconciling love. It is also one of the most challenging aspects of everyday life because forgiveness is not a matter of dogma or intellect, it punches us right in the breadbasket. The image which I used back then is the cover on a thoughtful exploration of the subject.

In this way we differ from all the animals. It is not our capacity to think that makes us different, but our capacity to repent, and to forgive. Only humans can perform that most unnatural act, and by doing so only they can develop relationships that transcend the relentless law of nature.

On October 10th I am beginning a study group on the subject of forgiveness. It's probably because of my preparation that I'm noticing that anger, apologies, hatred, forgiveness, alienation, retaliation, reconciliation, are all themes that show up on almost a daily basis in the news. Yesterday the head of the RCM Police in Canada apologized to Maher Arar for their part in his nightmarish suffering at the hands of the Syrians. Will Arar forgive them? Should he?

This theme of forgiveness seems especially pertinent in light of your more recent blog re: protesters at hospitals. Challenges to our hearts never seem to disappear. Your quote from Solzhenitsyn reminds me of another of his "the line between good and evil cuts through every human heart". He further goes on to state that the role of religious practice is to shift that line for the expansion of the good part and the reduction of the evil part; another ongoing challenge.