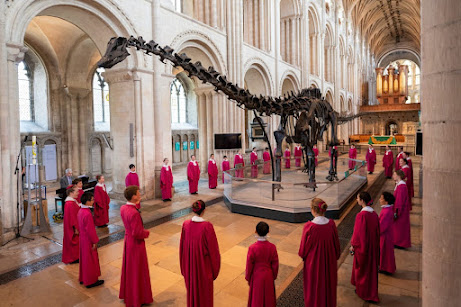 All things bright and beautiful,
All creatures great and small,
All things wise and wonderful,
The Lord God made them all.
He gave us eyes to see them,
And lips that we might tell
How great is God Almighty,
Who has made all things well.

During the periods when our congregation has been able to gather for worship during the pandemic I've been impressed by the number of seniors who've attended. It's the group most vulnerable to COVID-19 but we observed protocols and stayed safe, thanks be to God. Many congregations will resume worship today for the first time in 18 months and I imagine that there will be lots of elders who show up.

What if an actual dinoosaur  arrived for church? This has happened at Norwich Cathedral in Britain where what is actually a cast of a Diplodocus skeleton has been on display since July as part of  "Dippy on Tour" throughout the nation. As the photo above shows, choir membes were part of the opening at Norwich, singing John Rutter's marvellous  setting of the hymn All Things Bright and Beautiful and a nine-year-old chorister put the last bone in place. Since Dippy took up residence in the 900-year-old cathedral there have been 10,000 visitors.

We live in a time when some Christians are determined to see religion and science as opponents rather than allies. This has been very evident with conservative Christians who oppose vaccines but it extends to many other areas of scientific endeavour. It is baffling to me that some are willingly stepping back to superstition and magical thinking.

We know that in the 18th and 19th centuries the discovery of fossil remains of ancient creatures rocked the theological world as notions of an actual six-day creation and and a young Earth were challenged. The presence of Dippy in Norwich may seem a bit gimmicky but it is also a statement about God as the Creator who is not confined by limited human thinking. As a dinosaur myself I would certainly love to walk in that historic church with this massive creature nearby.