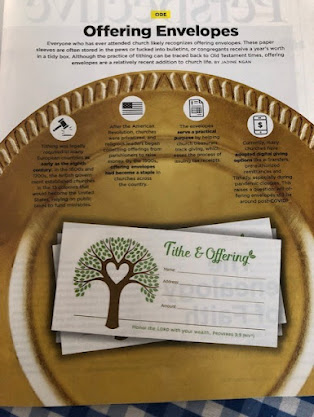 Broadview is the print and online magazine of the United Church of Canada. It is nearly always thought-provoking and innovative, not afraid to address challenging topics. I'm tempted to describe Broadview as "progressive" except that this term tends to be the religious left's "holier than thou" way of describing itself. I also enjoy when the magazine is "regressive"  such as the piece on jellied salads, a staple of congregational potlucks for decades. They are the source of nostalgia for some, although I'd be happy if I never saw one on a church table again. https://broadview.org/jellied-salads-jello-recipe/

In the issue which just arrived there is a descriptive page on Offering Envelopes, again a staple of church life in the Baby Boom era. They too are going the way of the jellied salad though, as many of us choose to support our congregations and the broader work of Christ's church through Pre-Authorized Remittance (PAR) and other forms of electronic giving. As a pastor I promoted PAR because it meant that members gave regardless of whether they were physically present during the leaner summer months. To this day some folk are resistant to using anything but an envelope, but most of us are accustomed to other forms of payment in much of our lives now.

There was and perhaps still is a place for the Offering Envelope, just the same. My mother got out the box of envelopes on Sunday morning, put in the cash, and wrote in where the money was to go. She explained to my brother and me that some went to pay the Local church bills, including our father's salary, and some went to the Mission and Service Fund which was church in the world. I recall feeling slightly resentful that money I could enjoy was being given away, but apparently the lessons were learned. When our children were growing up they were informed about where the money was going and our youngest was not impressed by how much was going to God when she had genuine needs.

The Offering Envelopes also fulfilled an important purpose as a physical act of worship. There is a place in the service when the offering is received as a sign of our response, in trust, to God's lavish love and generosity in Jesus Christ. Prior to COVID the offering plates would pass along the pews, we'd sing our thanks, and a prayer of dedication offered. There are PAR cards for this purpose but somehow it doesn't seem the same. I woujld always preface the offering with "we will now receive our tithes and offerings." Not many United Church members tithe, sad to say. but hope sprang eternal each Sunday.

So, Broadview, thanks for the memories, and the reminder of the importance of our offering as a form of practical spirituality. 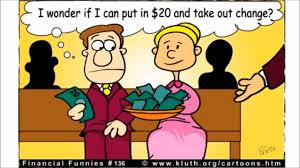