Labour Day Thanks to Medical Workers 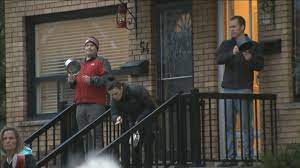 No one has greater love than this, to lay down one’s life for one’s friends.

Remember the eevning choruses of pots and pans in cities around the world as signs of appreciation for the selfless medical workers who were caring for those sick and dying from COVID-19? There were homemade lawn signs expressing thanks and neighbours organized to applaud exhausted nurses who lived on their streets. Some of those medical workers lived away from their families to spare them the threat of the virus. Some became ill themselves and some died, all in the service of others.

On this Labour Day I'm thinking of these workers and their contribution to our society. We shouldn't forget. Sadly, not only have a lunatic fringe of people minimized this contribution, they are actively harrassing the same valiant workers through often hostile protests at hospitals. Anti-vaxxism has become a descipable and dangerous cult which makes no sense whatsoever. We know that the majority of people now hospitalized with COVID have not been vaccinated, yet they still receive medical care. Some of them become deathly ill denying the virus even exists. Meanwhile, the protesters are harrassing healthcare workers and blocking ambulances. People attempting to arrive for chemotherapy and dialysis treatments are intimdated or slowed in meeting their schedules.

I don't have much truck with the notion of a God of vengeance but when I see these angry bullies I do figure that a few well-aimed lightning bolts would be in order, especially for those who claim to be Christians.

I began my Labour Day with a prayer of gratitude with those who are caring for others, as well as a prayer for their morale and safety. And for the protesters? Grow up, repent of your foolish ways, and love your neighbout as yourselves. 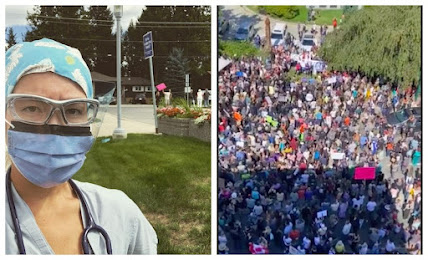 Medical Hero and Anti-Vax Kooks on Parade
Posted by David Mundy at 11:25 AM