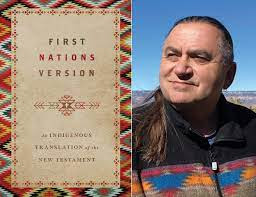 I have a bunch of bibles in various versions and paraphrases, as well as the Green Bible (environmental passages highlighted in green), Robert Alter's marvelous translation of and commentary on the Hebrew scriptures, as well as The Jewish Annotated New Testament.

I was interested to see that a First Nations Version of the New Testament has been published. This is the twenty-year project of Indigenous pastor Terry Wildman who is Ojibwe and Yaqui. Wildman was aware of scriptures translated into First Nations languages but these are not widely available and relatively few can read the texts. Over the years he has paraphrased passages for use in different settings using language which better suits the sensibilities of Indigenous peoples. John 3:16 reads:

The Great Spirit loves this world of human beings so deeply he gave us his Son — the only Son who fully represents him. All who trust in him and his way will not come to a bad end, but will have the life of the world to come that never fades away, full of beauty and harmony.

According to a Religion News Service article

In the First Nations Version, “eternal life,” a concept unfamiliar in Native American cultures, becomes “the life of the world to come that never fades away, full of beauty and harmony.” The Greek word “cosmos,” usually translated in English as “the world,” had to be reconsidered, too: It doesn’t mean the planet Earth but how the world works and how creation lives and functions together, said Wildman, the lead translator and project manager of the First Nations Version.They’re phrases that resonated with Wildman, changing the way he read the Bible even as he translated it for Native American readers.“We believe it’s a gift not only to our Native people, (but) from our Native people to the dominant culture. We believe that there’s a fresh way that people can experience the story again from a Native perspective,” he said.

This sounds meaningful and I hope it finds wide acceptance and use. Whatever invites people to engage with scripture in a culturally appropriate way makes sense to me/