A Thoughtful Book on Assisted Dying 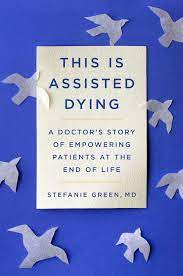 I am finishing up the honest, thought-provoking book called This is Assisted Dying by Dr. Stefanie Green. There is no ambiguity in the title and Dr. Green describes how she moved from a maternal and infant care practice to being one of the first doctors in Canada to provide medical support for those who fit the criteria for assisted death. These two aspects of medicine may seem to be at odds yet she shares how each discipline has its own intimacy and even rewards. Needless to say, every person who is born eventually dies and our society is grappling with how we ensure that those at the end of life don't experience needless suffering.

Dr. Green praises the work of hospices and palliative care and considers Medical Assistance in Dying as complementary to this important work. She speaks of the gifts she received in those early days of providing MAID from both the patients and their families. So many were in advanced stages of illnesses which caused physical and psychological suffering yet they were, for the most part, patient and gracious as they grappled with their own demise.

In a number of instances family members were the ones who struggled most with their impending loss. Some were vehemently opposed and in one instance religious family members were belligerent to the point of threatening to call police even though the request came from the patient and what Green was doing was legal. Some patients were atheists, some agnostics yet hoping for something beyond this life, and some with a deep faith which sustained them to the end.

I've found myself emotional at times as Dr. Green shares her stories. It took me to the many times in ministry I provided spiritual support to the dying, sometimes in their final moments. Particular instances rose up for me, unbidden, and recall my own sense of spiritual intimacy with individuals and families.

We are still figuring out how MAID can best be provided in Canada and I am among those whose commitment to the sanctity of life means that I feel we must proceed with the utmost caution in every aspect. This doesn't mean that I'm categorically opposed to assisted dying and Stefanie Green's book brings home that MAID can be provided as a regulated medical procedure with compassion and care.

She does touch on the reality that most of her patients in that first year were folk who came from middle class backgrounds and I sense predominantly white. Among the concerns about MAID is that it will be become an option sought out by those who are desperate because of poverty and a lack of access to other forms of medical care. And that those with disabilities may feel pushed in that direction when sufficient support isn't available, so this is an issue of basic justice for all.  We know that funding for palliative and home care is insufficient, again making MAID seem to be the primary option. The provision of MAID is not necessarily empowering for those we have pushed to the margins of society.

If you're trying to discern how you feel about assisted dying I would recommend Stefanie Green's book but there are lots of other resources available. She has also been interviewed by the CBC and other news outlets so you do a search.

Once again here is the revised statement of the United Church on MAID: