Blessing of the Bicycles and World Cycling Day 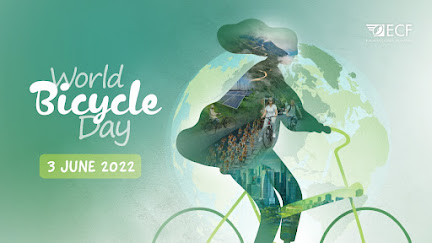 Yesterday I cycled the short distance to the gym because why would I drive on such a beautiful morning? It was only after I arrived home that I became aware that it was World Bicycle Day. I should have had an inkling because I acknowledged Bike Month (June) in a couple of congregations. Here in Belleville we had a Blessing of the Bikes at Bridge St. UC, followed by a ride through around the city. While we had perhaps a dozen cyclist in places such as New York City there are Bike Blessings which involve hundreds of cyclists and their rides.

I love the trend in progressive communities of creating cycling "schoolbuses", convoys of young cyclists to and and from school. In major cities such as Paris streets which were once dominated by vehicles have become thoroughfares for pedestrians and cyclists.

Ontario just re-elected a government which doesn't give a damn about the environment so making bicycle infrastructure a priority or offering rebates to e-bike purchasers ain't likely. I still think that riding a bicycle is a holy enterprise. At some point I'll tell you about the theft of my beloved bicycle and its miraculous recovery. For now I'll share the liturgy for the Blessing of Bikes at Bridge St, which you'll see is a tad tongue-in-cheek yet earnest at the same time.

A Reading from the book of the Prophet Ezekiel, chapter 1

In the thirtieth year, in the fourth month, on the fifth day of the month, as I was among the exiles by the river Chebar, the heavens were opened, and I saw visions of God.

Present in a world of cars and trucks and things that go, we acknowledge the inherent goodness of non-motorized human powered transportation and give thanks for the simple beauty of the bicycle.

Present in a community filled with children we pray for those learning to ride. Keep them alert, safe and visible on their neighbourhood roads.

Present in a community where cyclists aren’t always respected we pray for the victims of distraction, of road rage, and bike theft. And we ask for the strength to forgive mean people, and to be set free from the prisons of our own anger.

Present in a world of work we pray for those who build, repair and clean our bikes.  Bless those who choose to not drive to work for many reasons, including care for planet Earth.

Present in a community of beautiful diversity we ask your protection and blessing on all who ride; commuters and athletes, students and children, DUIers and those who can’t afford anything else, along with all others who take to the roads and paths of Belleville. Keep us safe as we travel.

We now observe a moment of silence for all who have died while riding.

Blessing of the Bicycles and Cyclists

God, bless these our bicycles and all of us as cyclists.

Pour out your protection on our CSA approved helmets.

Guide our handlebars and steer us ever true.

Bless our wheels that move upon your good Creation.

Anoint our brakes that we may know our limits.

Give us an internal GPS so we might always return home safely.

Send down your Spirit with a blessing upon these bikes

May our wheels rise!  Amen. 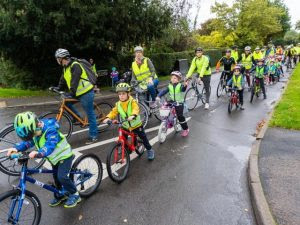