Honouring our Elders as we Vote 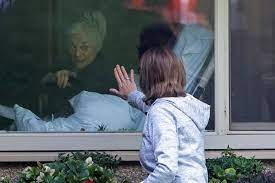 Honour your father and your mother, as the Lord your God commanded you,

in the land that the Lord your God is giving you.

When our mother died in November of 2018 we were at her side until her last breath. We were grateful to be with the loving parent who was present for our first breaths as we came into this world. In the moments after her death  I was able to offer a prayer of gratitude for her long and meaningful life, and to commend her to God's care.

During the pandemic thousands of Ontarians died in long-term care without benefit of family by their sides, and this haunts me. The photos of residents attempting to visit from behind windows was heart-breaking, and its likely that even though many who died may not have contracted COVID they perished from lack of stimulation and the practical attention that loved ones could have offered.

The pandemic has revealed the deficiencies of a system which leans heavily toward profit rather than comprehensive care for our elders. After the first wave of Coronavirus deaths seniors and their families were promised an "iron ring"  of protection by the Conservatives, yet another jingoistic phrase from a government which must have a full-time staff devoted to trotting them out regularly.

What we have learned over time is that the death toll amongst seniors had exceeded 4,000 in this province and went up again sharply with the Omicron variant. It was as though nothing had been learned from the mistakes of the early months. And the billions of dollars promised by the Ford government to "improve" the system will benefit the for-profit sector whose purpose is to make money, not to support those who are actually providing care and not the residents.

I have been struck during the past two years by the commitment of many Indigenous communites to protect and honour their elders as keepers of their traditions. Why have we failed so miserably in this regard? In the Judeo/Christian tradition we have a central commandment which directs us to respect our elders, but we seem content to push them into the background and accept that they will be the ones most likely to die when serious illness poses a threat. In the earliest days of Christianity, care for the vulnerable, including the elderly, was a powerful draw for those who were new to the faith.

As Ontarians choose a government today it's apparent that elder care isn't much of an issue for the majority of voters. Shame on us. Will it go well for us as we age, as the commandment suggests, or will we realize that we could have made a difference by our choices at the ballot box?

I will definitely be voting for eldercare. education and healthcare, and, of course, the environment, this morning !

Well Judy, we tried! From what I can see less that 20% of eligible voters in Ontario actually cast ballots for the Regressive Conservatives, yet they were re-elected with a majority. A lot of things are wrong here, including voter apathy. God have mercy on our souls.