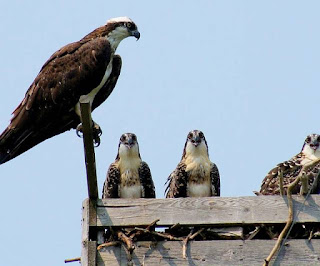 We are just home from a paddle on the Bay of Quinte which is an arm of Lake Ontario. Our community of Belleville (55,000) is stretched out along the bay and we can put in our kayaks from one of several public boat launches. Today, though, we drove ten minutes from home to the bay-side hamlet of Point Anne where we can paddle with little evidence of humans, including noise.

At this time of year we see lots of water snakes and turtles, including sizeable snappers, often quite far from shore. We saw blue herons and swallows, a kingfisher and a number of ospreys. Osprey populations dove across North America (pun intended) because the pesticide DDT and the chemcial compounds known as PCBs built up in the fish that eagles and ospreys ate. This made their egg shells so thin that adults crushed their progeny when they nested on them.

Both DDT and PCBs were banned in the 1970s and over the past fifty years ospreys, eagles, and condors have been making a slow comeback in North America. There is now an eagles' nest on a stretch of the Moira river we paddle north of Belleville. There are several osprey nests in town which we see when we're cycling along the bay and up the Moira.

There is so much gloomy news about the decline of reptiles, butterflies, and many bird species that it is a hopeful and spiritual experience to  be in a natural setting where there is evidence of recovery. The Bay of Quinte has been under a multi-year remediation plan which is designed to restore water quality, with attention to what goes into the watershed. It has been effective over time, which we see when we're on the water. Ospreys and eagles eat fish, so the ecology of the water matters.

Today we glided to a stop at one point, close to a bed of wild rice. We were at the mouth of the Salmon river, which is on the Tyendinaga Mohawk Territory. We thought about the generations of Indigenous people who lived off the land and water long before Europeans arrived. We took a moment for our brief ritual of making the sign of the cross and giving thanks to the Creator, which we often do in natural settings as an act of gratitude.

We can be disciples for diversity and abundance as faithful Christians.

And another thing...shortly after we returned home an osprey flew over our suburban court with a fish in its talons. 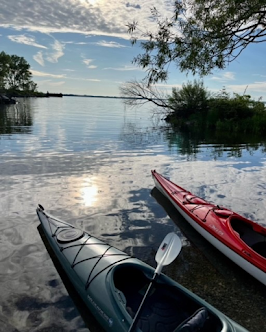