God Save the Queen? 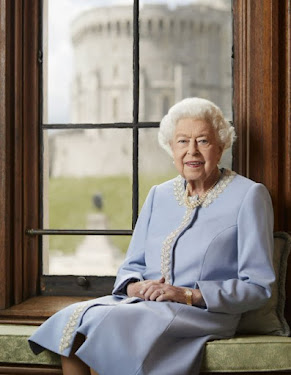 Her Majesty Queen Elizabeth II portrait for her Platinum Jubilee

God save our gracious Queen!

Thy choicest gifts in storeOn her be pleased to pour,Long may she reign.May she defend our laws,And ever give us cause,To sing with heart and voice,God save the Queen.

Her Majesty is a pretty nice girl
But she doesn't have a lot to say
Her Majesty is a pretty nice girl
But she changes from day to day
I wanna tell her that I love her a lot
But I gotta get a belly full of wine
Her Majesty is a pretty nice girl
Someday I'm gonna make her mine, oh yeah
Someday I'm gonna make her mine
The first time I attended the Canadian Club as part of my official hosting duties in Belleville Ontario I was mildly disappointed that no whisky was involved and rather surprised when we stood and sang "God save the Queen." Here were a bunch of mostly aging men singing their allegiance to the serving monarch of an empire which really no longer existed. And, lo and behold, I knew the lyrics of that first verse, even though I hadn't sung it in decades. It is a prayer, essentially, an unapologetic mash-up of church and state.
The other lyrics above are from a cheeky and mercifully brief song by the Beatles from the 1969 Abbey Road album.
This weekend marks the Platinum Jubilee of the coronation of Queen Elizabeth II who has surpassed Queen Victoria in the length of her reign. As part of this four-day celebration of the 70th anniversary there will be a worship service at St. Paul's Cathedral and the plan is for Her Majesty to be in attendance. Here is the description of the event:
A National Service of Thanksgiving to Celebrate the Platinum Jubilee of Her Majesty The Queen will be held at St Paul’s Cathedral on the morning of Friday 3rd June, 2022.

The Service will include bible readings, anthems, prayers and congregational hymns, expressing thankfulness for The Queen’s reign, faith and service; desire to foster unity and peace amongst all peoples; and commitment to care for God’s creation. The service will include a new Anthem by Judith Weir, Master of The Queen’s Music, that sets to music words from the third Chapter of the Book of Proverbs.

I went on the hunt for the lyrics of this anthem, because even though I'm not a monarchist I am something of a bible nerd. Queen Elizabeth is a devout Christian so I wonder if there is something within this chapter of Proverbs which is signficant for her. I should add that am I also intrigued by the phrase "commitment to care for God’s creation."

The bible includes a lot of monarchs, emperors and kings, and even a few queens. Some of them such as David and Solomon are on the radar of most people in the Judeo/Christian tradition. The Queen of Sheba is not only present in the Hebrew Scriptures, she is part of the Islamic tradition. The nefarious  Queen Jezebel, wife of bad-guy King Ahab, has been fetishized by evangelical Christians in the States as uppity women are branded with a "Jezebel spirit" (eyes roll here.)

What is most intriguing for me is the long tradition of monarchs eerywhere having a divine right to rule -- how convenient. In scripture the prophet Samuel warns Israel against appointing a king but no one listens and they end up with the mercurial Saul. Biblical monarchs represented the good, the bad, and the downright ugly, and that has been the reality through the millennia in most cultures. Today we are seeing a perplexing populism which elevates so-called Strongmen leaders, many of them thugs and murderers -- see Vladimir Putin.

I wonder what will happen to the British monarchy when Queen Elizabeth dies? This may be her final major celebration as her health fails. I'll never stand to sing God Saves the King, given what a cad Charles is, and it is a soap opera with the rest of the bunch. These verses from Psalm 147 come to mind:

Do not put your trust in princes,

in mortals, in whom there is no help.
4 When their breath departs, they return to the earth;
on that very day their plans perish.

My dear, departed mother was a contemporary of the Queen and adored her. She was even presented to her back in the 1970's and it was one of the highlights of her life. I'm no expert on the afterlife but Mom  may have been beaming as the worship service unfolded today.

I do hope God blesses the Queen in her remaining days. I do have great respect for her devotion to the role through the years, and can you imagine having a son such as Andrew? 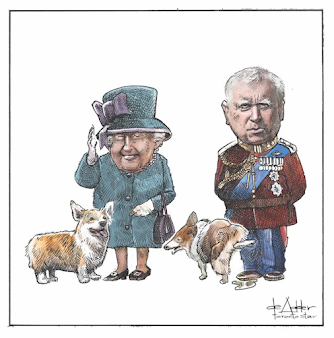